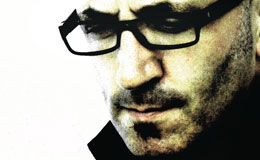 Mal Pope was born in Brynhyfryd, Swansea. Following a performance on a BBC Radio show as a teenager, Professor Pope was signed to Elton John’s Rocket Record Company and would work alongside him for the next 6 years.

Professor Pope studied at Christ’s College Cambridge where he graduated with a degree in Land Economy. He has written songs for Cliff Richard and The Hollies, duetted with Elton John and Bonnie Tyler, toured with Art Garfunkel and Belinda Carlisle and produced records for Aled Jones.

As a broadcaster, Professor Pope has presented shows on all of the BBC Network stations and hosted the BAFTA award-winning music programme ‘The Mal Pope Show’ for ITV Wales.  His documentary about the roots of Black Gospel Music, ‘Heaven’s Sound’, won a major prize at the New York Television Awards.

In 2005 his Musical ‘Amazing Grace’ was featured in the Cardiff International Festival of Musical Theatre and at the Wales Millennium Centre a year later. Professor Pope’s next musical, ‘Contender’ based on the life of the boxer Tommy Farr, opened in Spring 2007 and stared West End stars Mike Doyle as Tommy and Peter Karrie as Joby Churchill.

In 2009 Mal set up the ‘Grand Slam Theatre Company’ to produce his latest musical ‘Cappuccino Girls’.  The show toured across the UK before setting up a 24-week residency in the purpose-built ‘South Wales Evening Post Theatre’ on Swansea’s High Street becoming the longest-running musical outside of the West End.

In 2012 Mal set up YJB Films and his first Feature Documentary Film ‘Jack to a King’ was premiered at the Empire Leicester Square, London in September 2014, receiving 3 Bafta Cymru Awards a year later.

Professor Pope is currently working on a number of new projects including a musical based on the life of Richard Burton. He is Chair of the Swansea International Festival which next year celebrates its 70th Anniversary and in 2020 will become High Sherriff of West Glamorgan.