Carmarthen was awarded the title of UK Esports Videographer of the Year in the UK Esports Awards 2018. He has also since been nominated for the same category in the global Esports Industry Awards. Having studied at UWTSD’s Carmarthen campus, Rhys is now following his passion for esports and has set up his own production company – DLC Studios – focusing on the Esports market.

"Another passion of mine is esports and alongside my university work, I made a big effort to do external work within the esports industry. I started off on a voluntary basis working with grassroots British esports clubs and have since worked with some of the biggest brands within the industry, such as ESL and Level 99. This work has led to me being recognised in the Esports industry, both on a national and global level. Recently I was named UK Esports Videographer of the Year in the UK Esports Awards and have since been nominated a second time for the global Esports Industry Awards. It feels surreal to have my name featured in both the UK and global Esports award ceremonies, with my name sitting next to the filmmakers who actually inspired me to start doing work in the esports industry.

My hopes are high for the future and since graduating I have been focused on setting up my own company, DLC Studios alongside a team of three other talented creatives. Since leaving UWTSD, I’ve already had the chance to travel to places such as Sweden, Tenerife, Madrid and London to chase my dream of telling great stories.” Dr Brett Aggersberg, Film and Digital Media lecturer at UWTSD, is extremely proud of Rhys’ achievements and is pleased to see the company that was originally developed during his studies now flourishing. "Rhys joined our BA New Media Production degree after successfully completing a Creative Media Production course at Coleg Ceredigion. He immediately showed his dedication to the subject of film and media through his approach to projects and additional freelance work,” says Brett.

Since his first year with us, he has built up his experience by working with external organisations such as the National Trust and with bands. At the start of his second year, Rhys was able to visit his previous college as a Student Ambassador and demonstrate his developing portfolio with a striking showreel of the range of projects he had been working on. Over the past two years, he also developed his links with esports. He was shortlisted for Esports Videographer of 2017 and won UK Esports Videographer of the Year in 2018. This is a fantastic achievement for someone so new to the field, and in an area that is so competitive. Rhys continued to build up his client list with paid commercial projects for esports teams and esports energy drinks brands and has since set up DLC Studios as a professional filmmaking company to work within the field of esports marketing. This company was developed during our entrepreneurship module, and it’s extremely rewarding for us to see students succeed in this way. We wish Rhys all the best for his future and the success that he deserves.’ 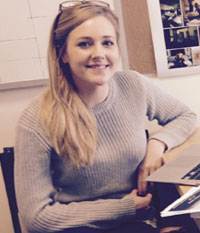 Lowri Bevan graduated with a first class honours degree from UWTSD Carmarthen. On graduating Lowri set up her own business, Digi Designs, which is a creative marketing and advertising agency focusing on native and artistic advertising for businesses across Wales. During graduation, Lowri was awarded with the Tudor Bevan Award – Contribution to Creative Writing or the Creative Arts in Wales. “It is such an honour to have been awarded with this bursary. I have thoroughly enjoyed my time at UWTSD and the many different aspects of my course. Completing the entrepreneurship module has allowed me to realise that I am now capable of building my very own business and it has opened my eyes to the amount of support Wales has to offer for young aspiring entrepreneurs like myself” says Lowri.

“My studies at UWTSD have allowed me to broaden and develop my skills and to learn and work within the growing creative industry in Wales. The course is amazing for aspiring individuals who wish to learn about new media practices and what the industry has to offer. The support and motivation that the lecturers have given me has been absolutely incredible.

I aim to become a well-established digital designer and to work on a variety of different projects and productions over the next few years to find my strengths within the creative industry. I also have a strong desire to begin working with Disney. They’re creators of experience, artists and amazing storytellers. I’ve always been a Disney enthusiast.

“The course provided the platform for me to work with an art department crew with the BBC and STARZ (US) who have worked on Doctor Who, Torchwood, Skins, and Da Vinci’s Demons. The experience of creating our own major projects was a huge learning curve. The creative process is long. You are constantly developing, problem solving and changing; I love the whole process. It proved to me how committed I was to finish a project, I would constantly compare my work with industry-level work, which in effect allowed me to get the high marks that I am so proud of.” Brett Aggersberg, Film and Digital Media Production Lecturer, Carmarthen campus, said:

“Lowri was a pleasure to teach over the past three years. She developed her background in art and design into a deep and professional understanding of how to maximise the potential of new media technology for engaging an audience. Her confidence has grown through making the most of all of the opportunities available to her, while studying on our Carmarthen campus. Lowri’s work is of an extremely high standard, and was even described by our external examiner as “better than some work produced in industry”. Lowri achieved a first-class honors degree as a result of her hard work and dedication, and we are convinced that she will succeed in whatever part of the creative industry she decides to work in.”