When Cupid’s sharp arrows pierce the heart, to whom should we turn for advice and comfort? To the patron saint of lovers of course – Saint Dwynwen, whose church is on Llanddwyn, a tidal island off the west coast of Anglesey. 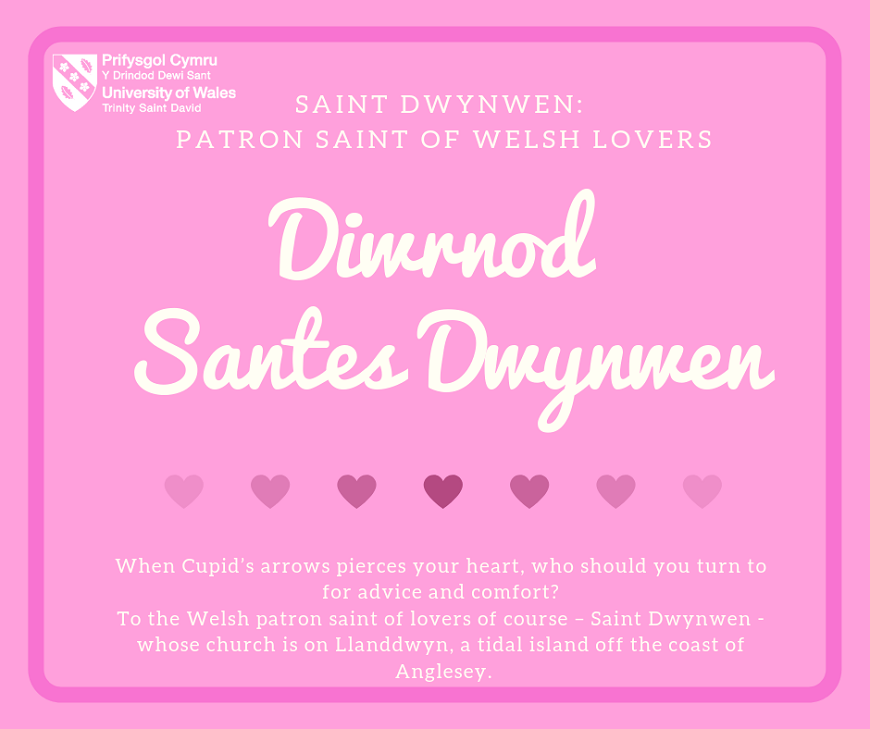 Dwynwen is the patron saint of Welsh lovers and her festival day is celebrated on 25 January. Over the centuries many have requested her help, including Dafydd ap Gwilym when he found it difficult to attract the married Morfudd as his sweetheart.

Dwynwen was brought up in Brecknockshire and was the daughter of an early medieval king, Brychan Brycheiniog; some say that he had at least a dozen children, others say as many as 36, and that all his daughters were beautiful. Dwynwen was particularly pretty and had a remarkably attractive personality – little wonder that Maelon Dafodrull fell in love with her. But her father Brychan refused to allow her to marry Maelon. Dwynwen was in a difficult situation: should she follow her heart, marry Maelon, and in so doing disobey and rebel against her father? Or should she accept his guidance?

She did not disobey her father. Dwynwen rejected Maelon, and as a consequence, some versions of the story say that Maelon raped her. Certainly, Maelon returned to his home in the north. Dwynwen was so sad that she asked God to make her forget Maelon and to freeze their love, and so it happened that Maelon was transformed into a block of ice.

Dwynwen prayed once more to God, and he granted her three wishes, that Maelon might be his usual self again; that she be inaugurated as the patron saint of lovers; and that she be allowed to live a single life (and to become a nun).

Because she had suffered in this way, Dwynwen was the ideal person to offer advice to lovers throughout the ages concerning their romantic problems. And so it was that lovers with a downcast heart would travel to Llanddwyn to be restored.

Mediaeval Welsh bards have made reference in their poetry to those who crossed from the mainland to Anglesey in flimsy boats in mid-winter, the wind whipping up the waves, to consult with Dwynwen. On Llanddwyn island there is a small church dedicated to her, as well as a holy well, and the pilgrims of old would light a candle, offer a prayer and leave a gift in recognition of the help they had received from the saint. Little wonder that the prebendaries of Llanddwyn during the Middle Ages were so very rich!

Dr Rhiannon Ifans is Dyson Fellow in the Faculty of Humanities and Performing Arts, University of Wales Trinity Saint David. Her main field of research is medieval Welsh literature. Other research interests include Welsh folk life and folk culture, carols, ballads, and Welsh theatre with special reference to the eighteenth-century interludes. An award-winning children’s author, she is a regular participator at international conferences, festivals, in schools, and in higher education institutions. She is also General Secretary of the Welsh Folk Song Society and edits the annual journal Canu Gwerin / Folk Song.