What could be one of the largest prehistoric sites in the UK has been discovered near Stonehenge by a consortium of archaeologists that includes geoarchaeologist, Dr Martin Bates from the University of Wales Trinity Saint David. 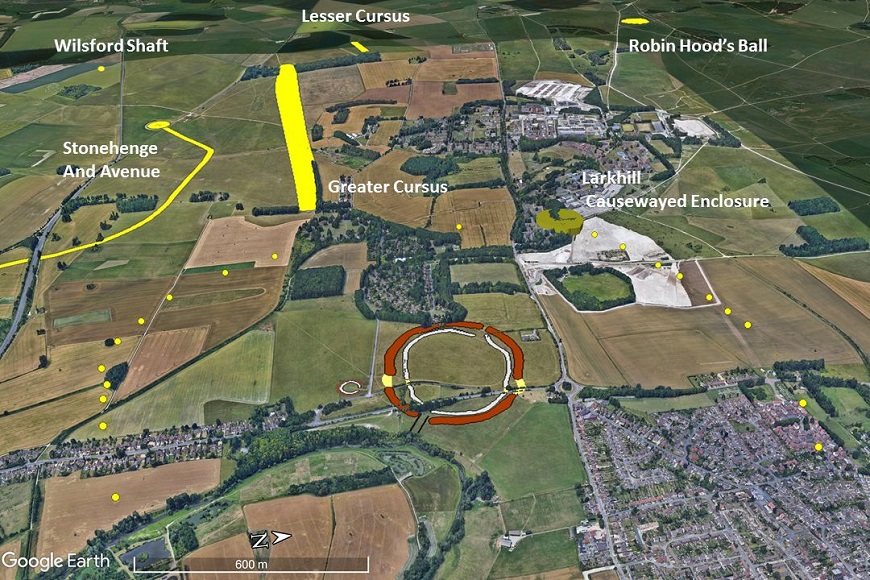 A massive 2km-wide ring of prehistoric pits up to 10m across and 5m deep has been discovered around the ‘super henge’ at Durrington Walls and the famous site at Woodhenge. The structures have been carbon dated to about 2500BC.

Archaeologists believe the circle marks a boundary around the massive henge at Durrington. It is thought the features, along with an internal post line, could have guided people towards the religious sites and warned others not to cross the boundary.

Dr Martin Bates’ role in the project involved drilling the holes in the features that the geophysics had identified, enabling the team to recover samples for dating and examining associated environmental change.

“When discovering features of this size in the past, antiquarians and earlier archaeologists would have applied relatively coarse methodologies, primarily excavation, to discover more,” said UWTSD’s Dr Martin Bates.  “Today, we can be more cautious and sympathetic to the archaeology.  Precision coring, guided by remote sensing, and a bit of luck, has allowed us to recover bone fragments close to the base of one of these features and that has allowed us to date their initial infilling.” Researchers have identified up to 20 'shafts' but estimate there may have been more than 30 originally.

Dr Nick Snashall, National Trust archaeologist for the Stonehenge and Avebury World Heritage Site, said: “As the place where the builders of Stonehenge lived and feasted Durrington Walls is key to unlocking the story of the wider Stonehenge landscape, and this astonishing discovery offers us new insights into the lives and beliefs of our Neolithic ancestors.

“The Hidden Landscapes team have combined cutting-edge, archaeological fieldwork with good old-fashioned detective work to reveal this extraordinary discovery and write a whole new chapter in the story of the Stonehenge landscape.”

Publication of research at Durrington is available as an open access article in Internet Archaeology. The universities undertaking field research supporting this press release included the University of Bradford with the Ludwig Boltzmann Institute for Archaeological Prospection and Virtual Archaeology the Universities of Birmingham, St Andrews, University of Wales Trinity Saint David, Warwick, and the Scottish Universities Environmental Research Centre. The work was undertaken a part of the Stonehenge Hidden Landscapes Project and brought together experts in non-invasive geophysical prospection and remote sensing, and specialists in British prehistory and landscape archaeology in order to carry out research in one of the most important archaeological landscapes  in Europe. The outstanding geophysical survey and visualization capabilities of the team has been made possible only because of the unique expertise and combined resources of the wider project partnership. an international collaboration of the Ludwig Boltzmann Gesellschaft (Austria), Amt der Niederösterreichischen Landesregierung (Austria), the University of Vienna (Austria), the Vienna University of Technology (Austria), ZAMG– the Central Institute for Meteorology and Geodynamics (Austria), Airborne Technologies (Austria), 7reasons (Austria), ÖAW– Austrian Academy of Sciences (Austria), ÖAI – Austrian Archaeological Institute (Austria), RGZM Mainz – Römisch‐Germanisches Zentralmuseum Mainz (Germany), the University of Birmingham in collaboration with the University of Bradford (GB), Arkeologerna of Statens Historiska Museer (Sweden), NIKU – Norwegian Institute for Cultural Heritage (Norway), and Vestfold fylkeskommune – Kulturarv (Norway).