As we stand on a crossroads after a long period of lockdown, Mererid Hopwood, Professor of Languages and Welsh Curriculum at the University of Wales Trinity Saint David, contemplates the challenge of choosing the path that leads to the place where we can give a fairer society its foundations. The place where we share this planet’s water and its fruits between us: co-sharing and co-operating; where there is an understanding between us, where we share an understanding, where there is a peace, a tangnefedd between us: where we share peace; the shared world, shared between us … all. 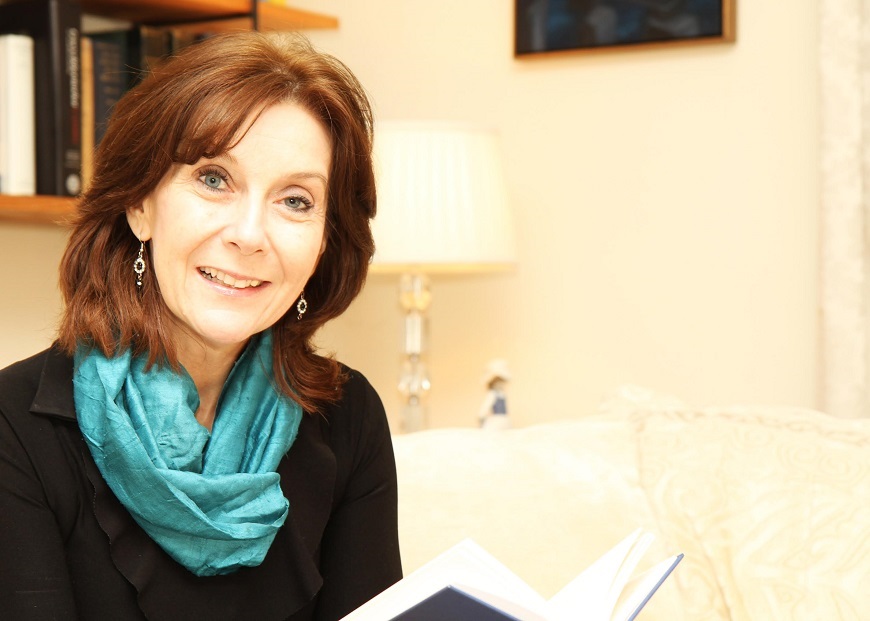 The Learned Society of Wales organised a conference in Cambridge in September 2018. The theme was ‘The Ethics of Sustainable Prosperity for All’. I was given a good twenty minutes for an after dinner speech in the medieval hall at Magdalen College. My rations this time are fewer. And I’m not in a large hall but rather here, at home, between the narrow walls of my study. Yet my perspective remains the same, and the shortened time slot is perhaps significant. Because, twenty months later, after the virus has forced us all to look at that which we could probably already see, but which was too inconvenient for us either to recognise or to acknowledge, we stand on a crossroads and choice beckons. ‘Build Back Better’ is the slogan. No thank you. Not if that means continuing on the same old track. Or at least, if we’re going to ‘build back’ then the ‘back’ has to stretch back a long, long way. Back to a time, if there were such a time, where the foundations of society were built on values that would measure success not according to economic growth - financial prosperty for some, poverty and extreme poverty for the others - but rather according to how peaceful and healthy life was for everybody.

The task in Cambridge was to share some thoughts on Wales and Peace. As is the case with everybody who sees the world through a mind that is home to more than one language, in the ‘mmmm’ that followed as I pondered over the email’s invitaiton, the code switched and ‘Wales and Peace’ became ‘Cymru and …well, what?’ Because we have two words for peace: ‘heddwch’ and ‘tangnefedd’. Both are fair words, ‘heddwch’ being the most obvious perhaps, but ‘tangnefedd’ having the greater ‘claim’ - its ‘path more grassy’ shall we say, ‘wanting wear’ even.

And treading this route, the thinking led me once more to the realization that neither word means exactly the same as ‘peace’ (no more than ‘Frieden’ or ‘Shalom’ or ‘Síocháin’).  And come to that, no more than ‘Cymru’ means ‘Wales’, for ‘Wales’, as we know, derives from the Proto-Germanic for ‘foreign’ and ‘Cymru’ from ‘com’ (‘together’ or ‘shared’) + ‘nrogos’ (a stretch of land, on the margins) making us the people of a shared country, of a ‘together land’.

It was a long ‘mmmmmmm’.

I supposed I could use the slot to remind us of the inspiring figures in Welsh history who have promoted peace at home and abroad; people like Henry Richard, MP, and secretary to the Peace Society in the mid 19th Century, a key figure on the international stage who took the notion of ‘arbitration’ (good word) from Tregaron Sunday School to London and Russia via Paris where – and I love this bit – he shared a stage with Victor Hugo of Les Misérables fame.

Next August, we must hope, we’ll be going to Treagaron and the National Eisteddfod where we’ll be able to admire his statue as the Apostle of Peace taking the square under his wing. And on the matter of statues, as recent events have reminded us so powerfully, you can tell much about a people by their statues. Go to Trawsfynydd and behold Ellis Humphrey Evans, the poet we know as ‘Hedd Wyn’ and whom we mourned again three years ago on the centenary of his ugly death in Passchendaele. There he stands not as soldier but as poet-shepherd. And while you’re at it, pop down to Aberdare to see Caradog, baton in hand, not honoured for leading men in bloody battle but in spine-chilling harmony as his famous Côr Mawr, the 450 or so strong choir, swept the board in the Crystal Palace at the end of the 1870s.

Back to peace. What about Richard Roberts, Blaenau Ffestiniog who chaired the first meeting of the Fellowship of Reconciliation (another good word) in 1914, becoming its first permanent secretary? Or the conscientious objector, George M Ll Davies? Or his cousin, the industrial magnate, David Davies Llandinam, part of whose family’s wealth was used to build The Temple of Peace and Health in Cardiff and to establish the world’s first chair in International Politics … where? In west wales - Aberystwyth to be precise.

What about Wales’ Youth and their Message of Peace and Goodwill - Neges Heddwch ac Ewyllys Da - that has reached the four corners of the world since 1922? The role of the women of Wales is striking. Think about them collecting almost 400,000 signatures in 1923 petitioning their sisters in the USA to do all they could to ensure their country joined the League of Nations. Or what about the women of Greenham Common? It was from Wales that the first group set out, over 30 years ago, to stand up for the violence-free way of organising society and refusing the crazy idea of nuclear armament.

Take a look at the Hanes Heddwch Cymru a’r Byd/Peace History Wales and the World conference programme UWTSD organised, also in September 2018, in conjunction with the Coleg Cymraeg Cenedlaethol. Wales has a long tradition.

But from Cambridge to Carmarthen, and if we like to boast about this town as being the home to Myrddin y Dewin, Merlin the Magician, I sense we have more to boast about it as the home of the priory where, in circa 1250, a monk whose name has long been forgotten, composed what is now the most valued treasure in our National Library: Llyfr Du Caerfyrddin. The Black Book of Carmarthen. The oldest extant book in the Welsh Language.t

I mention this, because in it we can find a very early example of that word ‘tangnefedd’. Or at least, in its short form: ‘tanc’. Here, in the seventh section, the following phrase appears: ‘tanc y rom ne’, (translated approximately as ‘may ‘peace’ be between us’).

As far as I can see, the word has three significant characteristics:

In the first place, it’s not something that comes about without effort; you must very deliberately set about reaching tangnefedd, creating peace; ‘peacemakers’ after all is the translation in the Bible of the Greek eirēnopoiós that we find in Welsh as ‘tangnfeddwyr’.

Secondly, once reached, it lasts. ‘Tangnefedd’ is not a truce, a patched up peace, a pause. As we see in the St Teilo Gospels of the 8th Century, where, after an argument, the leaders of two families reach ‘tangnefedd’ that will last ‘in oes oesau’: forever more.

But thirdly, and curcially, remember that quotation from the Black Book: ‘tanc y rom ne’; what interests me is the ‘rhom’, or in modern Welsh: ‘rhyngom’, and in English: ‘between us’. If ‘peace’ can exist on its own, this is not the case with ‘tangnefedd’. ‘Tangnefedd’ always calls for ‘the other’, whether that be a ‘tangnefedd’ between us and somebody else, between us and some divine spirit, or even between us and ourselves, i.e. between the body and the soul.

If we’re going to build society anew, a better society, let’s be bold enough to build it on lines that offer the possibility of a ‘between’.

Where can we find the drawings?

Welsh Medieval Law had a good idea when it ruled that in every disagreement, people should observe the following ‘Big Five’: ‘Guys a hawl ac atteb a barn a thagneued’.[1]  You’re given notice, you have rights, there’s a period of response, a judgement is reached and then peace is made between the disagreeing parties. You don’t go away bearing a grudge, but rather you leave in peace.

Another place worth rummaging for the drawings is in the bilingual potential of our Cymru, Wales.  Because having two languages is an automatic ticket to the ‘between’ that reaches both in and out – offering the possibility of difference, of seeing the world from the perspective of another. Educators in other bi- and multilingual jurisdictions celebrate the value of speaking more than one language and acknowledge what they define as the ‘interculutral competence’ this skill brings with it; i.e. a competence that makes it easier to understand points of view that are different from one’s own. And with this skill of comparison and understanding comes an opportunity to question one’s own assumptions, perspectives and prejudices.

It is in this ‘between place’ that those difficult but key words such as ‘arbitration’ and ‘reconciliation’ gain meaning. To arbitrate. To reconcile. Actions which are less headline-grabbing than ‘to wage war’, but actions which are infinitely more effective

Drawings that can also help to give us new foundations can be seen in the 7 Well-being of Future Generation goals, which are related to the United Nations 17 Sustainable Development Goals.

The 17 goals are generally portrayed as a row of windows. The 7 Well-being goals as a circle. No matter how they’re represented, it remains that in both cases, it is not possible to reach any one of them without working on all of them. Each of the 17 worthy UN goals belongs to the others, and though some have received more attention than others e.g. number 13: ‘climate action’, or number 7: ‘affordable and clean energy’, the point is this: no matter which goal concerns us the most, it cannot be achieved without paying attention to all the others. One which hasn’t perhaps often made the headlines is number 16: ‘peace, justice and strong institutions’. And one of the things that we in UWTSD will be doing over the next two years as part of an international ERASMUS project is to consider how these goals can be further developed in Higher Education.

In conjunction with this, it’s a cause of great pride that we have also been working with other universities in Wales towards establishing Academi Heddwch Cymru – a peace institute for Wales, a network that can draw up an annual programme that focuses the mind in Wales on ‘peace’ as an achievable goal and not as an ideal from the realms of a dream.

Under the auspices of the Wales Centre for Interantional Affairs our address will be at the Temple of Peace and Health. What a significant name, an old name on an old building, but it’s time to consider it anew. We can’t have peace for all without investing in health for all, justice for all, etc.

For further information about some of the courses offered at UWTSD that are associated with the content of this piece, please click on the links below:

Programmes offered at the Athrofa, Institute of Education and Humanities

The only woman to have won the three main prizes for poetry and prose at the National Eisteddfod, Mererid has also been the Welsh language Children’s Laureate for Wales and was awarded the Glyndwr prize for her contribution to literature. Her collection Nes Draw won the poetry section of the Welsh language Book of the Year Awards, 2016.