A team of Archaeologists, including UWTSD’s Dr Martin Bates, have discovered that ancient teeth from La Cotte de St Brelade in Jersey could be evidence of a hybrid population of Neanderthals and modern humans. 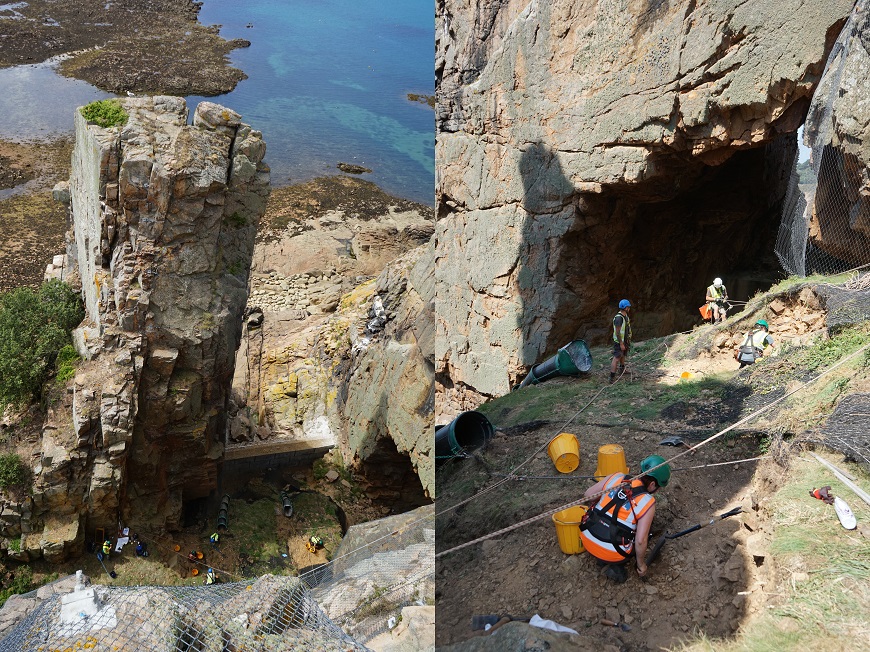 Discovered in 1910 and 1911 at the Jersey site, the set of 13 teeth were initially assumed to be Neanderthal remains, belonging to one individual. However, new research led by the Natural History Museum, published in the Journal of Human Evolution, has uncovered features characteristic of modern human teeth.

Dr Martin Bates is the project’s geologist, and has been recording and understanding the stratigraphy at the site and how it built up over time.  He said:

“The work on the teeth show the value of going back to historic collections of material where modern work at a site provides new contexts for this historic material.  So although the teeth were collected back in the early 20th century, modern techniques applied to both the teeth and the site now allow us to really begin to understand what the teeth represent and how old they are.

The work of the multidisciplinary team, led by Dr Matt Pope of University College London, that has been excavating the site over the last 10 years has allowed, for the first time, deposits in the vicinity of the area where the teeth came from to be examined with modern techniques.  So we have been able to date the deposits using modern methods and our discoveries show that the age of the material 3 to 4m below the horizon from which the teeth came from date to about 48 thousand years ago.  This means the teeth are younger than this date in all probability.”

The human teeth are thought to be around 48,000 years old, close to the presumed Neanderthal extinction date of 40,000 years ago. The La Cotte ravine has also revealed the most prolific collection of early Neanderthal technology in North West Europe, including over 250,000 stone tools. These include stones with sharpened edges that could be used to cut or chop, known as hand axes. Dr Bates added:

“The site at La Cotte is now in the process of being made stable to protect it against erosion from the sea and to allow new excavation which we began in 2019.  This work will really begin to understand the deposits from around the time of the teeth.  Jersey Heritage and its benefactors have begun funding this work but this is going to be a costly and time consuming job taking a number of years.  The site is challenging to work in and we have to abseil into the cave every time we go to work, which produces some challenges.”

Further information about this discovery can be found on the Journal of Human Evolution website.