The experiences of three people who have sought safety in Swansea have been shared in a new book produced by Joseff Williams, a BA Graphic Design student at Swansea College of Art, UWTSD. 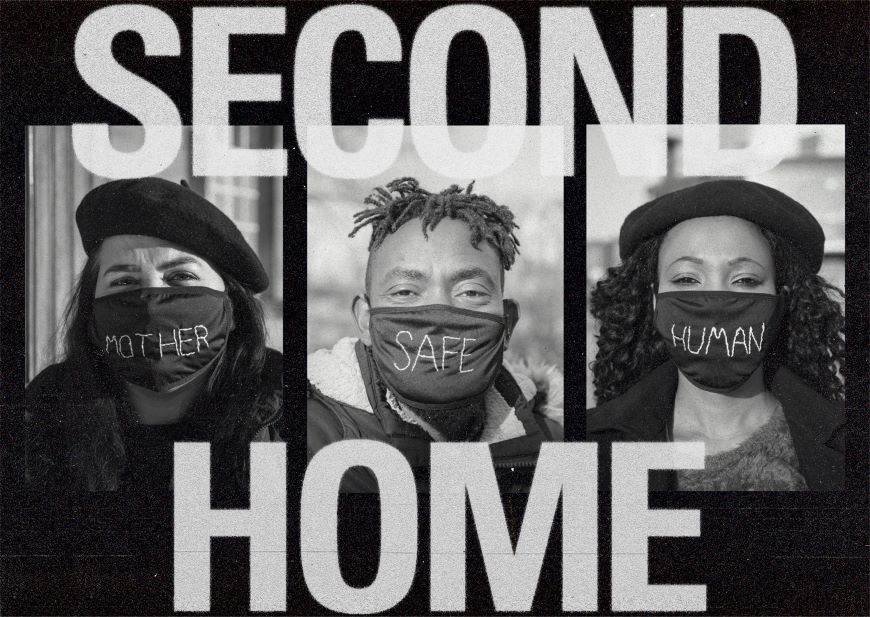 The book’s aim is to encourage empathy, address misconceptions about people seeking asylum, and bring respect and dignity to a group of people who are often misrepresented in the media. Plans are now underway to distribute the book in order to help achieve this aim.

The book, titled Second Home, was created by Joseff in response to the 10 Mile Mission, a brief given to students on the course to use the power of empathy within their work. Each student had to find a purpose within 10 miles of the university’s Swansea, Dynevor Campus and pitch this idea to staff for approval and ethical approval, before developing their project. Joseff chose to focus on asylum seekers and refugees.

“You could walk past someone on the Kingsway whose life has been threatened because of their sexuality, or perhaps another person who has been in prison because of their faith, and you would have no idea,” he said. “We often have no clue what the people around us have been through. I hope that the project will help us to question our judgements on people, particularly people who have had a difficult journey.”

“Asylum seekers and refugees are often misrepresented by the media or unfairly judged, so it’s important that they are recognised as valid members of our community,” says Joseff. “With that in mind, I was cautious that in highlighting a group of people, I didn’t wish to ‘other’ them. Striking that balance was something I thought about a lot.”

With this in mind, people are often referred to in the book as “people seeking asylum” as opposed to simply “asylum seekers,” to remind readers that they are people before any other label is attached to them.

“The participants also talk about their love of baking, gospel music, and charity work,” says Joseff. “We wanted to remind people that they have interests like everyone else. Also, while the people who featured in my book are fairly confident people (one has spoken at government level, another has appeared in national newspapers) this is not the case for every asylum seeker in Swansea. Many cannot speak about their experiences. With that in mind, the project needed to share the bravery of these individuals whilst also being sensitive and delicate to the lived experiences of people seeking safety.”

While he hopes the book will help promote empathy and understanding, Joseff is also appreciative of the insights he personally gained by creating it.

“Doing this project really made me step back and realise, ‘Wow. I thought I knew a lot. I actually know far less than I thought I did,’” he said. “We should all do more research into the system for asylum seekers and refugees. It’s eye opening. Working on this project has also demonstrated the power art has to really make you sit up and think. There’s a lot of potential for social change in creativity.

“The Swansea City of Sanctuary organisation and the African Community Centre have shown interest in distributing the book to raise awareness, which is great,” he added. “I’m sort of handing it over to the people who know best. They know how to best support refugees as they’ve been doing it for a long time.”

Donna Williams, programme manager of the BA (Hons) Graphic Design at Swansea College of Art, UWTSD, added that she is pleased with how well the book has been received.

“As part of our Graduate Attributes module, Changemakers, the second-year students on the BA (Hons) Graphic Design are tasked with how we use Graphic Design to effect change,” she said. “The project can empathise, educate, motivate, shock, inform, persuade and enlighten. The process required students to identify and consider an issue, a problem, an event, a process, an individual or a group who could utilise their creative skills and imagination to help improve a situation or perception.

“Each student transformed themselves in a ‘visual spokesperson’ by presenting an idea from within a 10-mile radius of the Dynevor Campus, Swansea. They are tasked to produce a designed concept which considers social, political, environmental or cultural concerns that need to be better communicated.

“This year submissions have ranged from the promotion and rise of the local milkman for sustainable local produce, a children’s book on Shared Lives, the power of reading events at Swansea Library, bottle collections in city centre, a visual signage game to learn sign language in the city, plant a tree and a campaign for reconnecting memories to the Swansea Albert Hall.

“We are delighted to showcase one of the projects, produced by Joseff Williams. Joseff was able to produce a well-researched and empathic book on the experiences of three asylum seekers who have made Swansea their second home. Joseff was professional throughout the whole process and was able to identify those who need a ‘voice’ by integrating meaningful research and creative skills to change perceptions, to challenge assumptions and to communicate truths.

“The City of Sanctuary organisation, which collaborated with Joseff on this project, was impressed with the outcome and is aiming to expand the project with exhibitions and possible publications. We are delighted that the work has been so well received and would also like to offer special thanks to the participants for engaging in this project.”