Studying theory on a university course can have enormous real-world value, as an apprentice on the University of Wales Trinity Saint David (UWTSD) Digital Degree Apprenticeship scheme recently demonstrated in his job working for Velindre University NHS Trust. 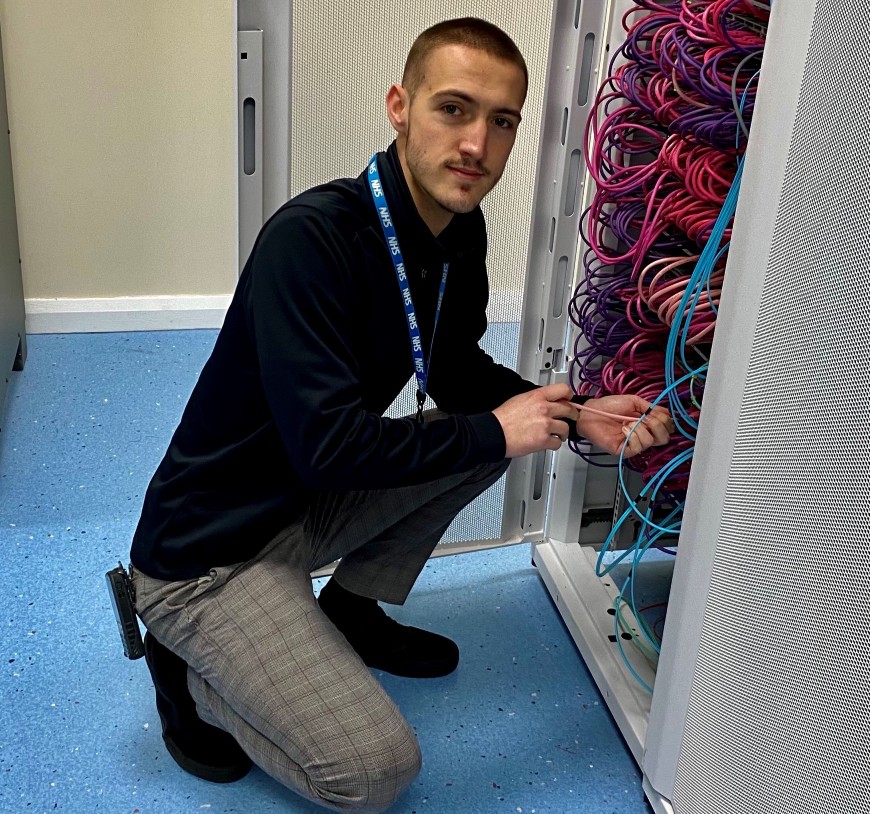 Samuel Jackson is a service desk officer for the trust, which is in the final stages of planning the launch of a new Digital Service Desk. Samuel is one of four service desk officers who will provide front line support across the trust, serving Velindre Cancer Centre, the Welsh Blood Service, Trust Corporate Functions and Health Technology Wales.

With the upcoming change in his job, Samuel is committed to developing his digital skills and knowledge, so he was keen to take up the opportunity to study for a Degree Apprenticeship in Cloud Software Development at UWTSD.

“I see this apprenticeship as the perfect opportunity to provide me with the foundations to take my career forward,” he says. “Digital Services within Velindre University NHS Trust is committed to education, learning and development and I relish the chance to learn and enhance my knowledge.”

However, the theory part of the course posed a challenge for Samuel, who is dyslexic and had previously struggled with the theory side of learning, which he therefore tended to avoid.

“This was still the case until very recently when one of our core network switches failed during the night,” he says.

All of the service’s core systems have a level of resilience that mitigates hardware failures and allows day to day service functions to continue, but the timing of this failure also meant there was a minimal impact for the service that needed to be addressed promptly.

“One of the managers of Velindre IT department offered me the opportunity to be involved in the upgrade as they knew I was enrolled in the apprenticeship and thought it would benefit my learning even as an observer,” he says.

During the down time and preparation work for the upgrade, Samuel’s manager asked him questions on the technical details of the work being carried out, and Samuel was delighted to realise that because of the theory element of his university studies, he knew the answers.

“I was able to answer these questions without hesitation due to the theory I had been learning in my L4 module, Cyber security and Networking,” he says. “This gave me a huge boost in the importance of theory and learning and confirmed that if I continue to put the work in, I will be able to achieve my goal of the degree.”

Dr Stephen Hole, UWTSD Apprenticeship Liaison Officer, is delighted that Samuel is already putting his studies to good use in his workplace.

"I am really impressed that Sam who started his apprenticeship studies in September 2020 had the confidence to become a member of the networking team that took part in the replacement of a key item of network infrastructure at such an early stage of his university studies,” he says. “It is especially good to see the theory, knowledge and skills from his studies becoming a reality in the workplace.  It demonstrates the excellent collaboration between the university and employers in the design of the Digital Degree Apprenticeship structure."