UWTSD Youth and Community Work graduate Alex Atkins has been part of a royal-first after the Queen held her first ever video conference call. 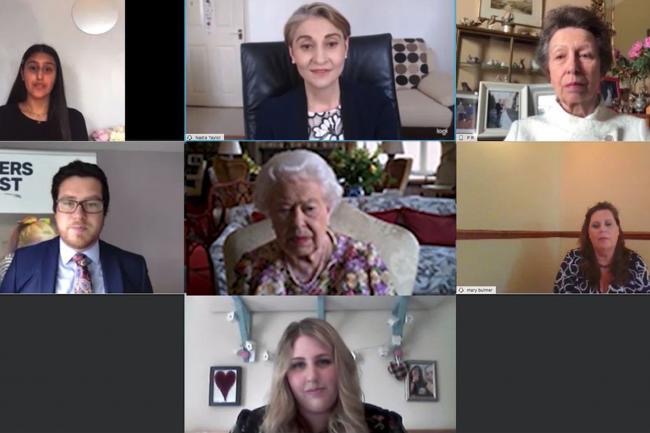 The Queen praised carers for their "extraordinary" work as she joined her daughter the Princess Royal to speak to four carers and Gareth Howells, the chief executive of the Carers Trust.

The Queen heard about the isolation and difficulties carers are facing during the coronavirus pandemic.

Among them was Alex, aged 24, who has been a carer for 16 years, and looks after for her mother Helen who has Bechets Syndrome, as well as her father Keith and her grandmother.

The call on June 4 was to mark Carers Week. Princess Anne is president of the Carers Trust, which provides support, services and recognition for anyone living with the challenges of caring, unpaid, for a family member or friend who is ill, frail, disabled or has mental health or addiction problems.

There are approximately seven million unpaid carers in the UK, and with vulnerable members of society currently shielding at home, many carers have taken on new responsibilities.

Alex graduated from UWTSD’s Carmarthen campus in 2016 with a first class honours degree. She said: “I learnt so much during this degree and developed so much in myself, and that is all down to the support and encouragement from the programme team.

“They aren’t just lecturers but they are youth workers too, it’s in their blood. They don’t just want to educate us but they want to nurture us too, which is such a unique thing. I don’t think I would have taken up or applied myself to some of the opportunities I was offered if it wasn’t for the push and backing from the lectures. They really want you to do your best and to shine.

“UWTSD was so supportive to me whilst I studied there from the lectures, student support staff to even the receptionists and maintenance teams. They are all so welcoming, supportive, caring and friendly, and if they can help, they will. I was studying full time, working part time, volunteering as well as having a caring role for my parents, also whilst being dyslexic and having dyspraxia. If I can do it.... you can too.”

She said: “Whilst running this project I had the amazing opportunity during Carers week, earlier this month, to speak to The Queen and Princess Royal via a video call and raise issues affecting young adult carers and adult carers.”

The past year has seen her back on campus guest lecturing on the programme she studied as well as supervising students for their fieldwork module.

She said: “Through this experience and the encouragement from lecturers has inspired me to return to UWTSD to study PCET at the University’s SA1 campus in September.

“Yet again the support from my lecturers has given me the confidence to do this. Angharad Lewis, Programme Director, goes above and beyond to offer support to current, future and past students. She truly cares about the work she does and wants students to achieve their full potential. Angharad, along with Alana Enoch and Sue Ainsworth have not only supported me through the programme but also encouraged me to do the PCET course. This will mean I will be able to teach at a post 16 level.”

Angharad said: “As a programme team, we are incredibly proud of Alex’s achievements, and it was wonderful to see her experiences as a young carer be recognised by the Royal Family during Carers Week earlier this month.

“One of the first messages that the Youth Work Programme Team shares with students when they begin their studies is that they will get out of the experience what they put in.  Alex epitomised this approach both within her studies and her extra-curricular activities.  Alex was a dedicated, committed and motivated student who strived to do her best at all times, and she made the most of each opportunity that came her way.  Alex excelled in her extra-curricular activities, which included representing the young people of Wales at the 7th Commonwealth Youth Parliament in Australia during her final year of the programme. Alex underwent a competitive application and interview process with Assembly Members. Whilst at the Commonwealth Youth Parliament, Alex was elected as Youth Affairs Minister as part of a mock Government activity.

“Alex was also Vice-Chair of the Campaign for the Children and Young People's Assembly for Wales. As part of this role, Alex co-wrote and co-edited – on behalf of young people in Wales – a report on the United Nations Convention on the Rights of the Child, and how young people’s rights are being met in Wales, which she presented to the UN Committee in Geneva.  Alex’ knowledge, understanding and experience of the UNCRC was integral to the UWTSD cross-Discipline Welsh Government funded UNCRC training which was delivered to sectors across Wales.

“Alex has remained in close contact with us since graduating, and has engaged in annual guest lectures as well as acting as Fieldwork Supervisor for students on their placements.  We are excited to develop these opportunities further with Alex for her placement with the Youth Work team as part of her PCET.”