Young artists from UWTSD’s Wales International Academy of Voice (WIAV) are touring with Mid Wales Opera’s new production of The Marriage of Figaro. 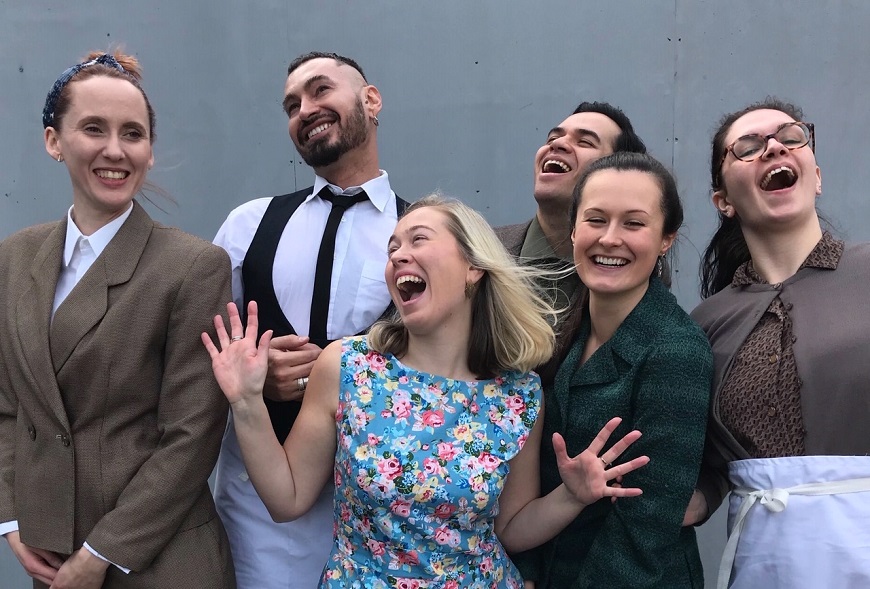 The students will be joining the new Mid Wales Opera production on tour as bridesmaids, chorus and as Barbarina.

Greg’s love of live performance led him to apply for and be accepted onto a performance programme being offered by the renowned Royal Academy of Dramatic Art, commonly referred to as R.A.D.A. In January 2014 he attended a course at this world famous institution in preparation for taking the Shakespeare certificates that they offer. These certificates are for those with a passion for drama, who love exploring the English Language and the sheer enjoyment that can be gained through the performance of Shakespeare’s work.  Greg worked with R.A.D.A. tutors concentrating on a Shakespeare monologue and sonnet as a main focal point.  Students were introduced to techniques and exercises used to analyse Shakespeare’s text and prepare for performance. Some of the topics covered included iambic pentameter, rhyming scheme, antithesis and imagery which help develop transferable skills in sight reading, confidence and communication.

From 2014 - 2017, Greg moved to York to attend the University of York where he successfully studied for his Music Degree. In his three years at York University Greg sang with choirs that belonged to the music department, including concerts in the magnificent Minster, smaller ensemble evenings organised by the Music Society, and at the National Centre for Early Music in a premiere performance of the Chamber Opera ‘La Purcelle’ that was part of the programme of performances put on for the York Spring Festival of Music.

The final year of Greg’s studies was a full and demanding with one highlight being a concert given by The Chimera Ensemble where part of the programme included Unsuk Chin’s Cantatrix Sopranica. Greg sang the Countertenor vocal part for this complex modern piece. Another high point of the year was a module which culminated in a musical and theatrical spectacle celebrating the work of the renowned Irish author James Joyce. One of the concerts programme credits Greg received was as a composer/arranger for his input to a haunting version of The Last Rose of Summer, a piece played for the audience in the foyer before the performances. He also danced in one of the scenes. His greatest input though was devising and appearing in two scenes, one in each half, where he appeared with two other male members of the cast as the ‘Museyroom’ ladies. The first half appearance of the Museyroom  ladies  afforded some much needed light relief in what was an otherwise somewhat intense and dark part one; a fact that was noted by a local press review that described the scene as something of a cross between Father Ted and Monty Python.

Victoria is currently studying for a master’s degree at WIAV with Dennis O’Neill. She has previously studied at Liverpool Hope University as a scholarship student and at the Royal Conservatoire of Birmingham where she won first place in the John Ireland prize and was a finalist in the oratorio, Ashley opera, Mario Lanza opera and French song prizes.

The operatic roles she has performed include: The Mistress of the Novices (Suor Angelica), Belinda (Dido & Aeneas), Constance (Dialogues des Carmelites), Holly in the world premiere of ‘Ava’s Wedding’ by Michael Wolters at the Crescent Theatre in Birmingham, Gretel (Hänsel und  Gretel) with the Leamington Sinfonia and Shepherd in Monteverdi’s Orfeo with the Brighton Early Music Festival. Victoria has performed with many choral societies around the UK, her repertoire including Saint-Saën’s Oratorio de Noël, Faure's and Durufle’s Requiem, Vivaldi’s Gloria, Handel’s Dixit Dominus, Mozart's Vespers & Coronation Mass, Haydn’s Creation, Bach's B Minor Mass and Handel’s Messiah.

Victoria is a keen ensemble singer and has previously sung with the St. Chads Cathedral Choir, the Birmingham Oratory Choir and the Birmingham Conservatoire Chamber Choir; the latter with whom she has recorded the Choral works of Vaughan Williams, Herbert Howells, Samuel Barber, Holst and Vaughan Williams on the Somm record label under the direction of Paul Spicer. Victoria also performs regularly with the group ‘Emporio Opera’ who specialise in Italian opera and musical theatre. Victoria is very grateful to receive a partial bursary from the Mario Lanza Educational Trust to help support her studies.

Adrian is a graduate of Circle in the Square Theatre School in New York. He has played the ill-fated lover Lun Tha in The King And I for numerous companies across the globe to critical acclaim, which includes the more recent Opera Australia national tour.

For the past 3 years, Adrian has been a member of Australian recording and tour group The Ten Tenors, completing multiple national and worldwide tours. He appears in their most recent album titled Wish You Were Here (Sony Music Australia).

Favourite productions include: a concert tour of Festival of Broadway - An evening with Stephen Schwartz; Disney’s Beauty and The Beast (Le Fou) at Melbourne Zoo; The Art Centre Gold Coast's production of Miss Saigon (The Engineer) and Stephen Sondheim’s Pacific Overtures (Kayama) for which he received a Greenroom Award for best supporting actor.

Most recently, Adrian made his Sydney Theatre Company debut in Muriel’s Wedding, directed by Simon Philips and was a finalist in The Acclaim Awards opera fellowship competition and semi-finalist for the German-Australian Opera Grant.

Rachael Marsh is full lyric soprano from North Wales. She is on her first years of her masters now studying under Dennis O’Neill. She has previously studied under soprano Anne Williams King. Rachael has recently sung the title role of Suor Angelica with North Wales Opera Studio in St George’s Hall, Liverpool. Additionally she covered the role of Musetta for Flat Pack Opera, Ellesmere Port. She has had the wonderful opportunities performing in Ripon Music Festival with the Rhos Male Voice Choir; converts working alongside Wrexham Symphony Orchestra and concerts working with Shrewsbury Orchestra in Shrewsbury Cathedral. Rachael is looking forward to covering the Countess with Mid Wales Opera in 2020.

Rachael is also a previous runner up of the Llangollen International Eisteddfod’s Voice of the Future competition in 2018.

She was an avid member of North Wales Opera Studio for 4 years where she worked with Anne Williams King, Deborah Lea and Marco Belluzzi to stage a mixture of operatic scenes and arias. This included a very successful concert ‘A Night at the Opera’ with Wrexham Symphony Orchestra.

She has also sung a range of Oratorio including Mozart’s Vesperes and Vivaldi’s Gloria with Cor Glyndwr.

Welsh Soprano Stephanie Smith studied at the Royal Northern College of Music under the direction of Mary Plazas and graduated with a BMus(Hons) degree in Vocal and Opera Studies. She continued her studies at Postgraduate level at the Royal Welsh College of Music & Drama with Gail Pearson and spent her second year at the Hochschule für Musik und Theater in Leipzig, Germany, as part of the Erasmus Exchange Programme. Stephanie is now continuing her studies at the Welsh International Academy of Voice with Dennis O’Neill CBE.

Stephanie frequently appears on the concert platform, and has been a soloist in many Oratorio including: Mozart Requiem (Tenby Arts Festival), Rutter Requiem (St David’s Cathedral) and Haydn Stabat Mater (St David’s Cathedral). She recently made her Recital Debut in the University of Leeds International Concert Series performing a recital of female composers for international Women's day.

This year she had the privilege of singing in the Chorus of Tosca at the Abu Dhabi Festival alongside the Royal Opera House cast of Tosca including Sir Bryn Terfel. Stephanie is looking forward to making her debut with Mid Wales Opera in their spring tour of The Marriage of Figaro as Barbarina, where she will be touring all of Wales.

Hollie-Anne is a promising Soprano, currently working with Eiddwen Harrhy and previously Wendy Eathorne. She holds a Masters in Music (Vocal) Performance from the Royal Welsh College of Music and Drama, and was awarded a scholarship to attend. Prior to this she studied in London and was awarded a First class honours for a Bachelor of Music. Previously, Hollie spent time living in Italy to learn the language.

Recently, Hollie-Anne has performed the role of Cathleen in R.Vaughan Williams Riders to the Sea with Bute Park Opera. She also featured as the concert soloist in Bernstein's Chichester Psalms with the BBC National Chorus of Wales at Hoddinott Hall, Wales Millennium Centre, and broadcast on BBC Radio 3.

Notable Concert performances include; Featured Soloist in V. Tormis's 'Songs about Song and the Singer' and Eric Whitacre's 'Cloudburst' with The BBC Symphony Chorus at BBC Maida Vale Studios, and broadcast on BBC Radio 3. Also, Hollie-Anne has performed as the Soprano soloist in Faure's Requiem (Lymington Choral Society) and in Pergolesi's Stabat Mater (Music in Mayfair, Hanover square). She regularly performs in concert as one half of the vocal duo Cantorion Cariad, at events and functions across South Wales.

A keen recitalist; she has recently performed in the Dora Stoutzker Hall-RWCMD, Penarth Pavillion, St George’s-Hanover Square, Garrick's Temple-Hampton Court and York House-Twickenham. Future recitals include evening of Opera at St German’s Church, Cardiff. In London, Hollie has sung with The Lovekyn Baroque Consort, Loki Music and for The Richmond Early Music Festival.

Her choral career spans 7 years. She was recently successful in gaining a Choral Bursary to sing with the BBC National Chorus of Wales. Singing with the BBC Symphony Chorus conducted by Stephen Jackson and acclaimed conductors like Pierre Boulez and Sir Andrew Davis, Hollie had the opportunity to sing in 7 BBC prom seasons, commissions of new choral works and feature on various recordings and televised performances.

Hollie-Anne has a strong interest in Outreach Music Performance. She regularly sings in Care Homes and hospitals, having recently given a recital to raise money for Southmead Hospital Charity. Hollie-Anne has been a regular soloist of The Bold Balladiers Touring charity and Love for Life Musical services for several years, giving performances in care homes, schools and local communities, UK wide.

Hollie-Anne has also performed in Musical Theatre. Most notably she has played the role of Nancy in Oliver, whilst training. Some shows include; A Christmas Carol (Playing Martha Cratchit), and The Wizard of Oz (Chorus), and in concert she has sung roles such as, Eponine (Les Miserables), Bess (Porgy and Bess), and Maria (West Side Story). Hollie trained for many years in Ballet and Contemporary Dance.