The University of Wales Trinity Saint David has appointed the Chaired Bard Aneirin Karadog as Project Co-ordinator and Welsh Tutor at Canolfan Rhagoriaith. 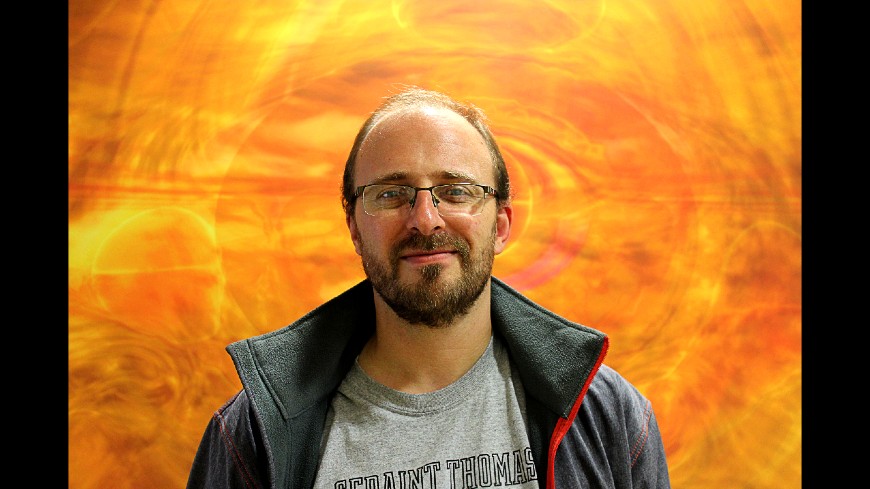 Aneirin will work three days a week for Rhagoriaith, the University’s Centre for Welsh Language Services, and he will have the opportunity to work on all types of interesting projects involved with the work of the University.  As a part of his post, Aneirin will teach on the course ‘Welsh in a year’, teach seminars in connection with the BA Education and PGCE courses, teach on the National Sabbatical Scheme for teachers, fine tune Welsh text as well as creating and editing resources for teachers and pupils.

Aneirin was born and bred in Llanrwst, before moving to Cwmllynfell and Pontardawe as a child.  Then the family moved to Pontypridd where he lived for a number of years, before making a home with his family in Cwm Gwendraeth.  Aneirin worked in Tinopolis for nine years as a researcher and reporter on the programmes ‘Wedi 7,’ ‘Sam ar y Sgrîn,’ and ‘Heno’, before moving to freelance work.   Since then, Aneirin has been working as Bardd Plant Cymru (Welsh language Children’s Laureate) and as a freelance poet.  Last year, Aneirin graduated with a doctorate in Welsh from Swansea University.  The family moved to Brittany for a year where Aneirin lectured on English out in Brest University, and since returning to Wales, he has been lecturing on Breton in Aberystwyth University.

When Aneirin saw the advertisement for the post, he felt that it would be perfect for him as it was a of a high standard, and on his doorstep.  As a freelancer, applying for a post such as this would mean that it would be possible to have some structure in his week, and an opportunity once again for him to be able to work as a part of a team, as well as continuing to work freelance.  He is looking forward to being able to make a difference and to seeing development and progress amongst the students he will be teaching.

Aneirin said: “I feel that I will be accomplishing something extra… I get great satisfaction from the creative projects I do as a freelancer, and am looking forward to continuing to do that, but I think that it is possible for me to contribute in other areas as well.  Seeing somebody grasping a language is a joy, claiming it, and taking possession of it.”

As Aneirin begins his new post, he is looking forward to introducing some of his expertise to the post.

“I’m looking forward to bringing creative elements into things and literary or poetic elements if there is a place for them.  I’m looking forward to the element of being able to work on projects, and being part of a team, but also working with teachers who choose to go on the Welsh in a year course… I believe that this is a huge thing, and it is extremely important as regards reaching the Welsh Government’s target of a million Welsh speakers by 2050, that the scheme exists.  I’m looking forward to seeing the teachers’ progress – those who have almost no Welsh in September and then at the end of the year they are fluent… thinking of being a part of that is exciting.”

According to Aneirin, there are several fronts to endeavour to work on in order to raise the standard of Welsh and to encourage people to espouse it and use it. Aneirin believes that there are a number of different strata in society in the effort to get people to speak Welsh.  The missionary work in schools and the pupils’ choice not to use it as the language of the school yard is an old story, nevertheless it still exists. Then there is the element of incomers moving into some counties, and the importance of showing that the Welsh language exists, in order for them to use it within their new Welsh communities.  Another element is to get those that are fluent in Welsh to use their Welsh every day and to encourage confidence in them.

Dr Lowri Lloyd, Director of Rhagoriaith said: “We are delighted to welcome Aneirin to the team and we are sure that he will be a great asset to the University.   His extensive experiences in the field of creative writing and as a linguist will contribute very significantly to the work of Rhagoriaith.  It’s a very exciting appointment!”