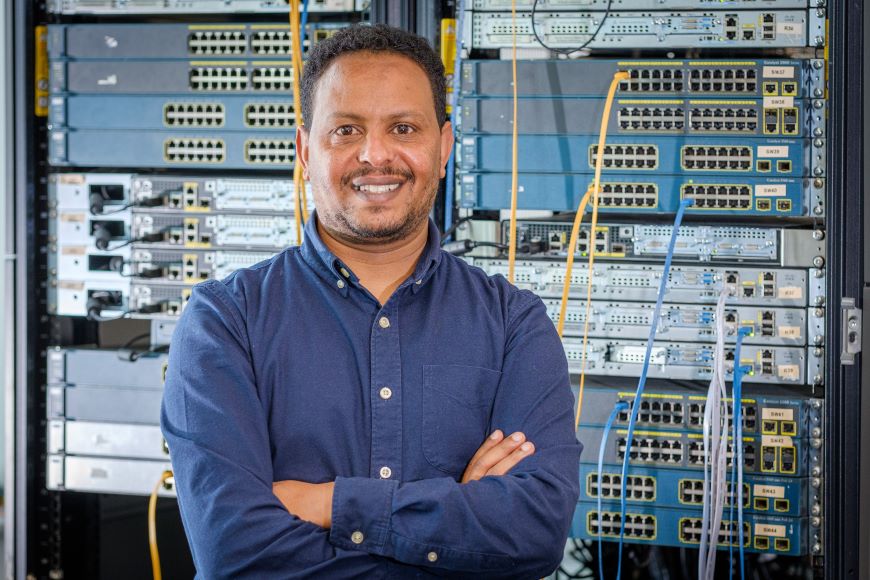 One of six siblings, Yohannes’ mum, despite not being educated herself, had instilled in him the importance of having an education from a young age and had watched proudly as he excelled in school.

Yohannes said it was his parents that had motivated him to continue his studies when he arrived in the UK and that the University of Wales Trinity Saint David (UWTSD) had helped strengthen that learning journey by not only opening the door to a university education, but also helping to rebuild his confidence as he continued to learn new skills.

“Like many people, I have faced difficult times, but if I am asked it is my family who have supported me in so many ways to go through all difficult times and who I credit as my biggest influence and are responsible for my passion and determination to better myself,” he said. “It is from my mother that I get my positive attitude and willingness to succeed.”

Yohannes said he had looked at several institutions before enrolling at UWTSD, and it was the small class sizes and closer relationships with lecturers that attracted him.

“I am really grateful to UWTSD, a university that believes in me and has equipped me with further knowledge and skills.

“I initially started a foundation course and my lecturers worked tirelessly with me as I progressed to complete and was awarded a first class honours in Computer Networks and Cybersecurity. And now I have been awarded a distinction in my master’s. My lecturers know about my journey so far and are able to help with any questions and have supported me throughout.”

Yohannes’s extensive skills and expertise in Applied Computing earned him a place amongst the 400 competitors at the WorldSkills UK National Finals last month.

He said he couldn’t believe it when his name was read out for securing a gold medal at the finals.

“It was a real pinch me moment. It wasn’t easy but I put in a huge effort, and it all proved worthwhile,” he added. “A huge amount of thanks to my training manager Nitheesh Kaliyamurthy and to WorldSkills organisers Toby Bell, Brendan Burns and Robert Balfour.

“I was nervous at the beginning, but to be honest I didn’t need to feel that way,” he said. “There was so much support amongst the competitors and again I was supported by the Welsh WorldSkills team. It was an amazing experience taking part. We all kept each other motivated and were also able to learn new skills from each other each day.

“I’ll be keeping touch and adding all the contacts I’ve made to my industry network.”

Yohannes is now keen to secure full time employment in his chosen field and has been helping current students at UWTSD in the CISCO Lab. He has also gained industry experience, working part-time at Orange as a network administrator and more recently as a penetration tester at Evolvement Networks.

“I am keen to get as much industry experience as I can and to help students at UWTSD in the same way as I was helped when I arrived,” he said.

“I enjoy being able to pass on my skills and expertise to others. That means so much to me.”

Kapilan Radhakrishnan, Academic Director (Applied Computing) said: "The School of Applied Computing staff are absolutely thrilled for Yohannes who has overcome adversities to showcase his talent at the world stage. The WorldSkills competition not only test students on their technical skills but it is a test of character, agility, and mindset. Yohannes has been a brilliant student throughout his studies at UWTSD, this Gold medal is a testament to his knowledge and skills."