A former University of Wales Trinity Saint David student will be competing at the World Coastal Rowing championships in Portugal this week. 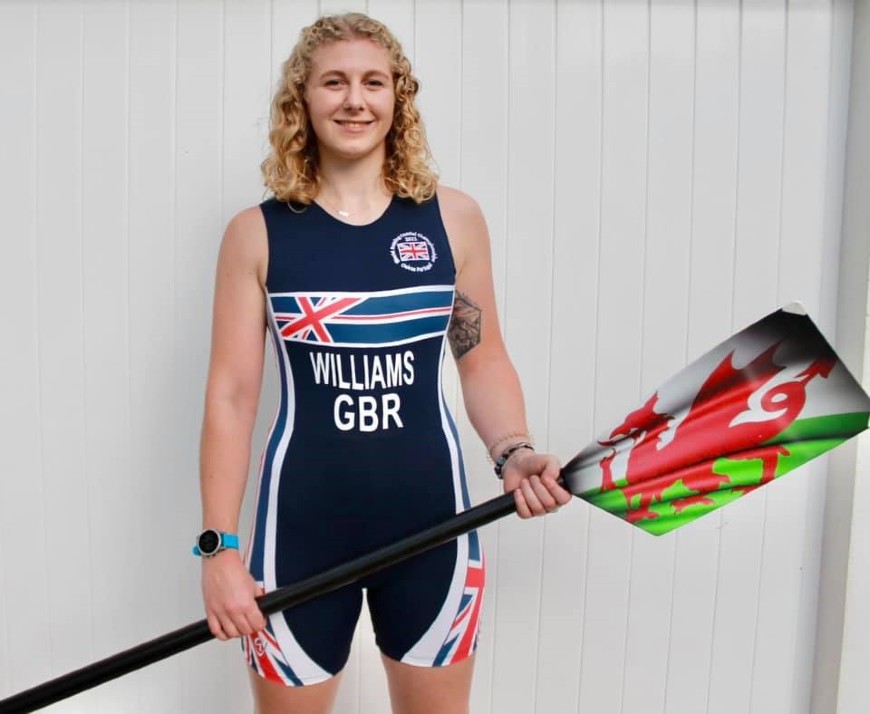 Swyn Williams from Dinas Cross, Pembrokeshire will represent Britain in the mixed pairs rowing competition with her rowing partner Tom Brain from Swansea.  This is not the first time that Swyn has competed in the world championships, as she competed and reached the finals in Monaco in 2016, and also in Canada in 2018.

Swyn said: “I’m really looking forward to competing again this year in the world championships. We are hoping to get to the finals. We’re not sure what to expect out in Portugal, but we know that as long as we give our all in the qualifying rounds, then all we can do is hope for the best.

Swyn’s interest in rowing began when she was 14 years of age. She is now a member of the Carmarthen Rowing Club, and although her first love is coastal rowing, she also enjoys river rowing.

Swyn chose to study her degree course, BA Physical Education, at UWTSD back in 2016.

“I knew I wanted to study something related to sport at university. I attended the open day at UWTSD and really enjoyed it… the idea of being in Wales close to home, and the opportunity to study some parts of my degree through the medium of Welsh, was exactly what I was looking for at the time.”

The course offered plenty of variety from practical to theory work, with constant tutorial support, and Swyn says that she could not have asked for better provision.

“It is wonderful to see Swyn continuing to excel in sport since graduating from our BA Physical Education degree. She was an excellent student and is a fantastic role model for students pursuing high performance sports alongside their studies. We are all delighted to see her go from strength to strength since graduating and we look forward to following her successes in the future.

Since Swyn discovered that she had gained a place at the world championships, aspects of her degree course have assisted her along the way.

According to Swyn: “It had been difficult for me over the years to find a specific structure for my training, as we don’t have coaches in the world of coastal rowing. The sport doesn’t get any financial support, but studying sport at university gave me a better idea of how to structure sessions, when to push my body and when to relax. The course has definitely developed my interest in gaining a better understanding of the sport.”

Swyn now follows a strict training programme, and has been doing nine training sessions a week whether on the water, on the rowing machine or in the gym. She has also been following a suitable food plan to prepare herself.

Although Swyn’s hopes are high for this year’s championships, her dream is to be able to compete at next year’s world championships, as the competition will be held right on her doorstep in Saundersfoot.