From firefighter to animator – via a part-time degree at UWTSD

Swansea firefighter Gareth Lewis is forging a new career for himself as an animator after achieving a first-class honours degree in 3D Computer Animation from the University of Wales Trinity Saint David (UWTSD). 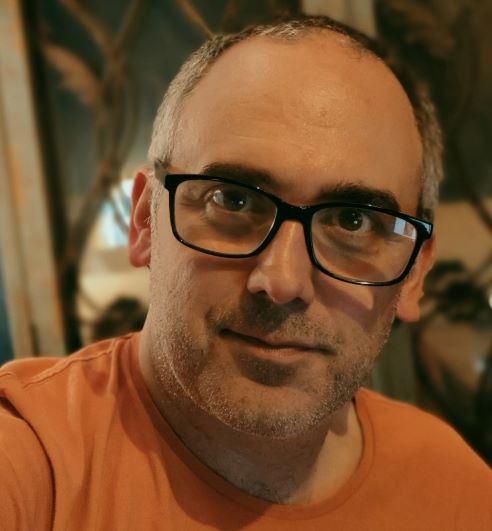 Gareth’s choice of degree reflects a long-standing interest in computing and animation.

“I completed a Foundation Diploma in Art and Design at Swansea Institute of HE in 1993 but didn't take it any further at the time,” he says. “I've also been fascinated by computers since a young age. I guess I'm intrigued by the process of creating images more than influenced by any particular artist.”

Inspired by the saying, “Find a job you enjoy doing, and you will never have to work a day in your life,” he decided to explore options for local study and the university worked to create a flexible solution.

“I contacted Phil Organ, the head of course, who was really helpful and we figured it out from there,” says Gareth.

He managed to juggle his job as a fireman with his studies thanks to the support of his lecturers and his family.

“I could often manage lectures and assignments around my shift work but almost all of my holidays were also arranged to allow for deadlines,” he says. “Juggling work and study required constant negotiations with an understanding family. Out of necessity, I quickly learnt how to manage my time and even submitted work early when I had to.”

“Gareth is one of most generous and helpful students I’ve met….and one of the most conscientious!” recalls Phil Organ, Programme Manager, BA Computer Animation. “To fit around his fire service shifts we ended every term working out which modules to squeeze where – and when – for the coming year! Fantastic work ethic and fabulous animations, and with his skillset range I know he will do well upon graduation.”

“The course was a lot broader in scope than I'd imagined” added Gareth. “Not only were we working through all roles in 3D animation workflows - many of which are discrete roles in the industry - but also film studies, critical thinking and entrepreneurial skills.”

He now has freelance work in a key Welsh film studio and is exploring further opportunities in the industry, helped not only by his qualification but also by the extracurricular experience he gained during the course.

“I had a rule to never-say-no to opportunities during the course,” he says. “From our lecturers' introductions, I took part in a number of extracurricular projects and some of these have already led to freelance work. Careers advisor Melanie Hall (possibly the most enthusiastic careers advisor on earth) was a great help with my CV and a huge encouragement in getting myself ‘out there’.

He adds that he would definitely recommend the course to others.

“All of the lecturers, Phil Organ, Al Kang and Scott Smith brought their experience (and characters) to their teaching in great variety,” he says. “I can definitely say that the more you put in, the more you get out and I'm finishing with a huge net gain for the experience.

“The course was challenging artistically, technically and academically. At times, the pressures can feel quite extreme, but these are the moments when support from the lecturers and, importantly, from your fellow students really comes to the fore. This wasn't restricted to single year groups either. Advice and critique were available from advancing students and graduates alike - a practice I encouraged and participated in.”