Students at University of Wales Trinity Saint David are looking forward to performing the musical work ‘Adre’ Dros Dolig’ (Home for Christmas) in front of an audience during the Christmas period. 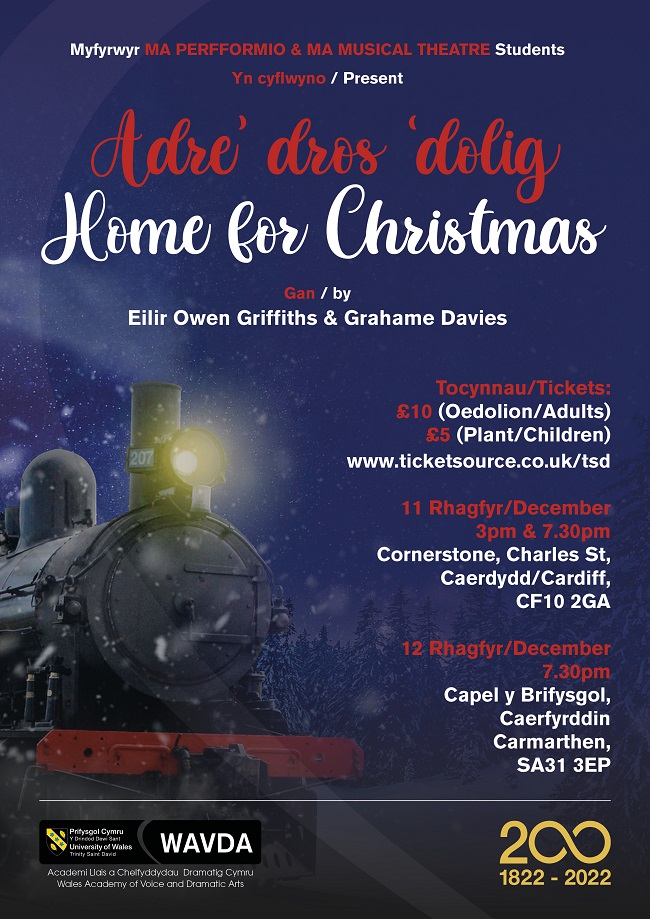 Adre’ Dros ‘Dolig is an entirely brand-new work written by composer and University senior lecturer Eilir Owen Griffiths, and the poet Grahame Davies, who was responsible for the words. It weaves together original works and traditional carols, giving the work a totally new look.

It’s Christmas Eve, and we see all types of people crossing paths in the hurly-burly of Cardiff’s Central Railway Station. It is essential to get home for Christmas, but there, amongst the chaos and cold is a homeless man, watching people as they pass by. Bags are full of presents and messages of love, but instead of Gold, Frankincense and Myrrh, the people are offered wisdom with hope warmth and understanding.

Eilir said: “It becomes obvious in the work that the city people are too busy to do anything and that they have no time to think and to stop, but once the trains stop at the station, it’s a totally different story, because everyone has to tarry awhile. That’s the message of ‘Adre’ Dros ‘Dolig’, that everyone needs to stop every once in a while to think and to consider what is happening both around them and in their own lives. “

The work will be performed by MA Perfformio and MA Theatr Gerddorol students, with students of the new course BMus Vocal Performance also taking part as the carol singers. Eilir Owen Griffiths will be conducting the performance, and the Welsh Session Orchestra will be accompanying it throughout.

Rachel Phelps, a member of the cast added: “The experience of working on ‘Adre dros Dolig’ has been really exciting. Being able to be part of something completely new like this is so special. The show is inclusive of everyone and contains songs in Welsh, English, Mandarin and Portuguese. I’m really looking forward so much to performing the show in front of a live audience, and alongside superb fellow students.”

Kirsty Whyte, a MA Theatr Gerddorol student mentioned: “I’m looking forward, but I am still nervous to be a part of ‘Adre dros ‘Dolig’. To be allowed to take part in performing a new musical is such a special opportunity, and one for which am most thankful.”

‘Adre’ Dros ‘Dolig’ will be performed at the Cornerstone, Cardiff, on December 11th at 3.00pm and also at 7.30pm, and the work will also be part of the Vice-Chancellor’s Christmas Concert, to be held on Sunday evening December 12th at 7.30pm in the University Chapel on the Carmarthen campus.

Tickets can be ordered here for Cardiff and Carmarthen performances.