Students studying the Welsh medium course MA Theatr Perfformio a Chyfarwyddo (MA Theatre Performance and Directing) at the University of Wales Trinity Saint David have recently been working with the charity Oasis to run workshops for refugees and asylum seekers who have settled in Cardiff. 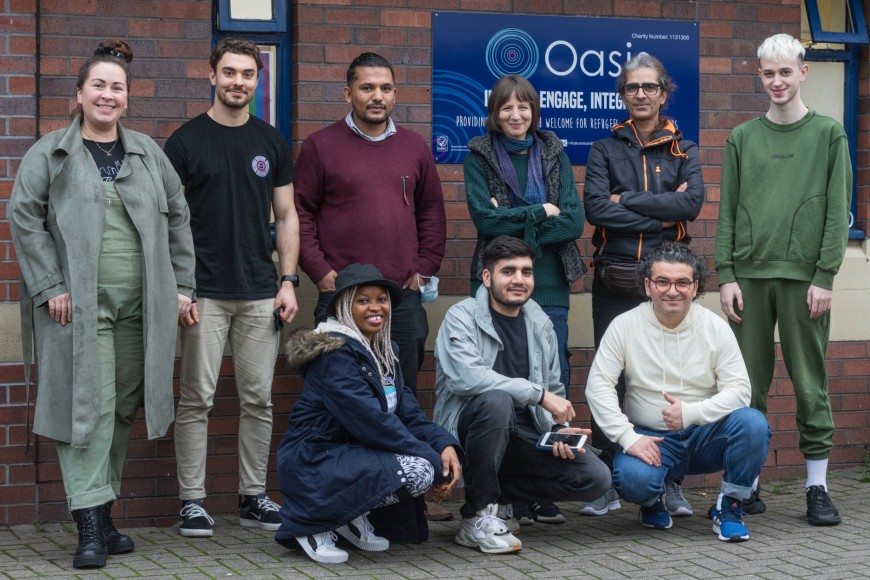 The idea originally came about when one of the charity's clients declared her interest in drama. Oasis realised that there was potential for the idea of creating a relevant activity for their clients as an opportunity for enjoyment and to reduce stress. The charity's volunteer coordinator, Share Bower, contacted the University to see whether it would be possible to work together to enable this project to be realised.

This new partnership sees the University opening its doors and creating new contacts within the Cardiff community. In addition, a project such as this challenges the students to deal with unfamiliar situations by transferring the skills of the theatre and its relevance to people so that they can express themselves.

Tomos Owen from the charity Oasis said: “We are pleased to collaborate with UWTSD on our drama project. The project was set up to create a safe space for refugees and asylum seekers to express themselves and to improve their mental health through drama. The student-led sessions are excellent, and give our clients the opportunity to learn about drama and the techniques in a way that many would not be able to experience without this partnership. The students and our clients get on well together, and we know that this promising partnership can turn out to be a special long-term one."

The University will hold a total of four one and a half hour sessions, and client numbers vary from session to session.

To date, the sessions have been successful in developing clients’ self-confidence, giving them an opportunity to be able to express themselves and practice some of their English. It is also a time for them to be able to forget about life’s worries for a short while.

Before the students started working with Oasis one of the course tutors, Elen Bowman, contacted Kate Duffy-Syedi from the Phosfurus Theatre company who specialises in working on similar projects, for advice on the type of workshops that should be held, and to learn what vocabulary should be used to make it a comfortable experience for them.

“I ran the first workshop, and what struck me more than anything was the feeling of beauty there in bringing joy to the room – the warmth and sharing of stories. It is important to provide them with an experience that gives them a feeling of worth. When people share stories themselves, they have to feel comfortable and safe in the room, and to see the people trusting us and sharing their personal stories was a pleasant feeling. It is a special experience to be able to hear these people’s stories, and to learn more about the world from their stories.

“Many of these people have come from violent countries and situations, so coming to a space where they can be free to share who they are without any prejudice takes time for them to become accustomed to this environment, and to trust us." 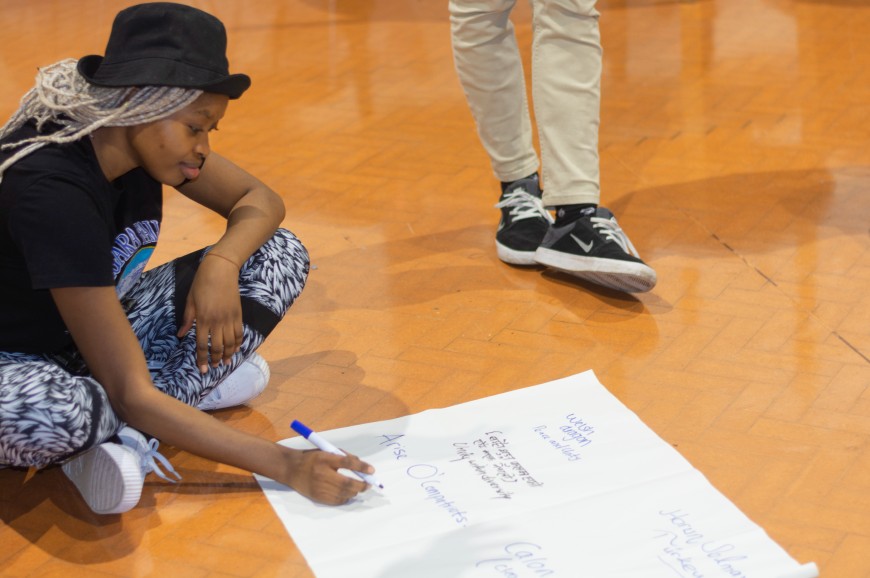 As part of the sessions, the crew play several games to make people feel comfortable in their company, and to get to know each other better. The intention is to get people to feel creative, and to learn the skills of listening to each other, and to share experiences.

“This is a golden opportunity for the students. They learn so many skills; leadership skills, preparation skills. They learn how to deal with difficult occasions, for example if someone starts to cry, or what to do if someone shares a harrowing story with the group. All these situations make the students think about how to deal with the situation".

The experience so far has been valuable for the students and has made them look at things objectively and realise that they can make a difference.

One of the students, Leigh Alexandra Woolford, said,

“When the news broke that a large number of families were coming to our capital city to find sanctuary, I really wanted to help in some way.  I never imagined the University would have organised the opportunity to develop our skills by helping others.  Being invited to be part of the warm-hearted community established to support refugees here in Wales is a very special feeling."

Due to the nature of the sessions, there are currently no plans to create a production as such, but instead they are focusing on specific workshops. Leigh for example has prepared a workshop on the national anthem by sharing and discovering the meaning of important songs and hymns for the session's attendees. Leigh added,

“I will start with voice exercises, then I would like to explore the stories behind the songs that are so important to us in Wales, particularly as rugby spectators converge on the city.  I feel that it is very important to give a taste of our heritage as Welsh people and the way in which a song can create unity within seconds.  Similarly, we will work in workshop mode to find out what traditional songs and stories create passion in other countries."

James Hope, another student involved in the project, said,

“I chose to base my workshop on Clowning because it encourages us to play and use our imagination.  But, most importantly, it allows yourself to relax and look like a fool (in a 'free child' manner), and be comfortable, by having fun in a group.”

As the relationship between the University and Oasis continues to strengthen, it is hoped that this project will become an annual one. Hopefully the project can also be extended to other charities to give students a context of life in order to tell credible stories. 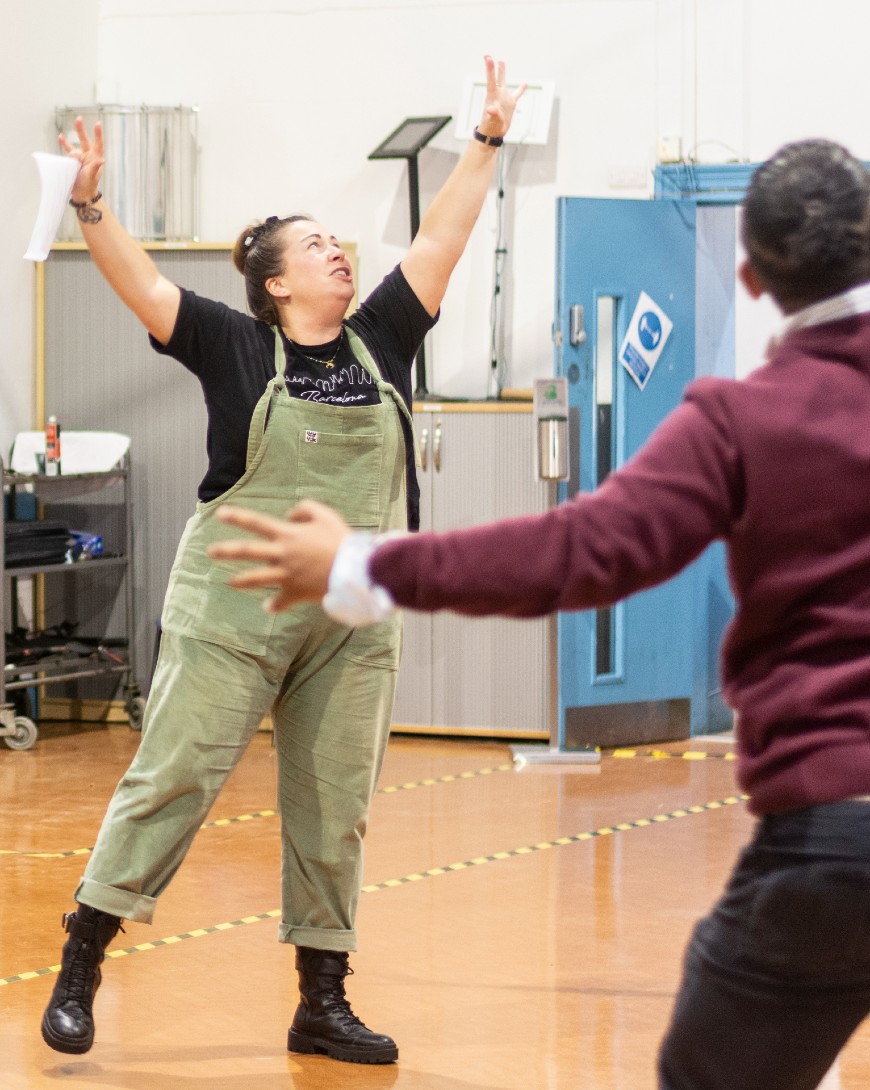