The University of Wales Trinity Saint David (UWTSD) was delighted to welcome Motorsport Engineering graduates Holly Yeomans and Harley Gasson, who now work for McLaren Automotive, back to the university’s SA1 Swansea campus to share their industry skills and expertise with current students. 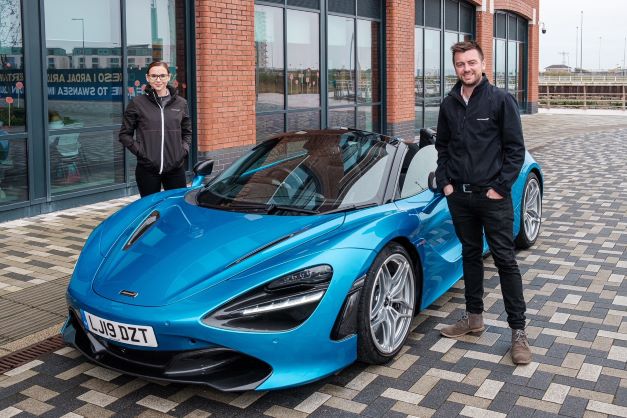 Holly graduated in 2015 from the BSc in Motorsport Engineering programme. During her time at UWTSD, she was a student ambassador at a number of events run by the Motorsport Industry Association (MIA) to gain further experience and knowledge of the industry. After graduation, Holly worked for the Sinclair group in Swansea before moving onto McLaren Automotive in 2018 as a Project Engineer. Holly then progressed to the position of Motorsport Sales Specialist before starting her current role in May 2021 as a Senior Project Engineer in the Propulsion section.

Harley graduated in 2012 from the BEng Motorsport Engineering course, having previously completed the HND in Motorsport in 2010. He was Chief Engineer for the Formula Renault team that was the precursor to the current Team MCR programme. He went onto complete a MSc in Automotive Engineering. Harley joined McLaren Automotive in 2013, initially as a Powertrain Design Engineer before working his way up to his current position of Senior Powertrain Design Engineer.

Holly said her time at UWTSD gave her and insight into what she could achieve within the motorsport industry and the skills and knowledge to achieve it.

“I remember being sat in a lecture hall at UWTSD listening to someone from McLaren give a presentation, thinking I’d love to do that and imagine that feeling of coming back to your own university and presenting to future students on what you do and how you do it.

“That person was Harley who is with me today. He told us that we could be doing this, and I am now saying the same to the students today – you can do it too.

“Ask yourself what you can do to get to that position - it’s a question of changing your thinking to back yourself to achieve. Take every opportunity you can as it will benefit you in the future. Everything you learn about the motorsport industry will be beneficial to your career.”

Holly and Harley are pictured with a McLaren 720S outside the University’s IQ building in SA1.

The talk was the latest in a series to enable students to hear first-hand from UWTSD graduates about the opportunities within the industry.

Last month Chris Bull, Principal Aerodynamicist at Renault F1 Team, returned to the University to share insights of working alongside Formula 1 teams with current students. Chris graduated from UWTSD in 2004 with a BEng in Motorsport Engineering and has worked with Formula 1 teams for the past 15 years. 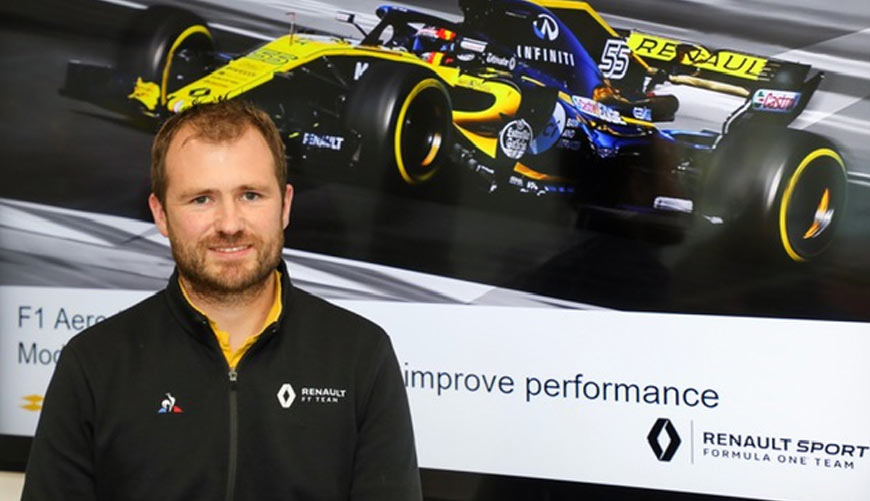 Chris was one of the aerodynamicists who worked on the well-known double diffuser on the 2009 championship winning Brawn GP car. He joined Renault during the takeover in 2015 with its vision of becoming a leading running team again.

Chris said his final year University project led to his dream job of working in Formula 1.

He said: “I thoroughly enjoyed studying in Swansea. There were great opportunities to apply engineering skills which was particularly important to me. With help from lecturers, I developed my technical skills to understand engineering problems in a scientific way, working on projects individually and together in a group.

“My final year dissertation was in collaboration with Jordan Grand prix where I developed and analysed a front suspension upright. Having an opportunity to work with a company helped to showcase my skills and lead to working in Formula 1.

“I have worked in Formula 1 teams for the past 15 years working for small teams like Super Aguri which consisted of 100 people, to championship winning team Mercedes with 1000 people. Everyday there are technical challenges and opportunities to learn something new and that is what I like about engineering and aerodynamics.

“My advice for current students would be to make the most of your situation, don’t be afraid of asking questions to learn and showcase your skills.”

Dr Kerry Tudor, Automotive Engineering Programme Director at UWTSD said: “Within the Engineering Department at UWTSD, we run a Professional Development and Employability Series and as part of this we often organise guest lectures from individuals in industry. We especially try to get alumni, who have previously graduated from us and now have a successful career. Having Holly, Harley and Chris come and talk to our engineering students is a great opportunity to hear the career progression that our graduates can achieve and how UWTSD has been imperative to these jobs within the industry.”