A MUSIC producer and composer from Carmarthenshire has hailed the strength of the creative sector in South West Wales. 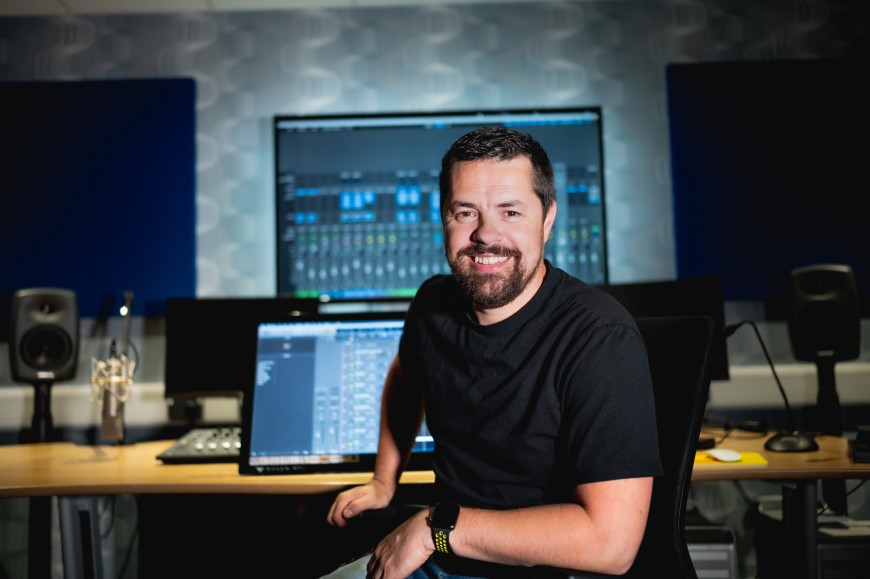 At its heart, Canolfan S4C Yr Egin, based on the University of Wales Trinity Saint David campus in Carmarthen, inspires creativity and imagination, fostering talent for the future.

Steffan Rhys Williams, who has a music studio at the centre, says Yr Egin provides a combination of world class facilities and networking opportunities with other creative sector professionals.

For the last 20 years, Steffan has worked in music composition and production for TV and media. His credits are varied, from musical director for BBC1’s ‘Songs of Praise’, composing music for ‘Time Team’ on Channel 4 and hours of music, sounds  and exceptionally catchy songs for S4C’s daily programme service for younger viewers ‘Cyw’, including BAFTA award winning programme ‘Rapsgaliwn’. Recent work includes ‘Save our Cinema’ – a forthcoming film for Sky Arts about a campaign in the 1990s to save Carmarthen’s Lyric Theatre.

Steffan said: “The creative sector has been very strong in South West Wales for many years, but the one missing link was a hub to bring much of our creative sector talent together. That changed with the opening of Yr Egin, and I can’t speak highly enough about the quality of the facilities and the experience here. It’s a world class centre,and some of Wales’ top talent agree!.” 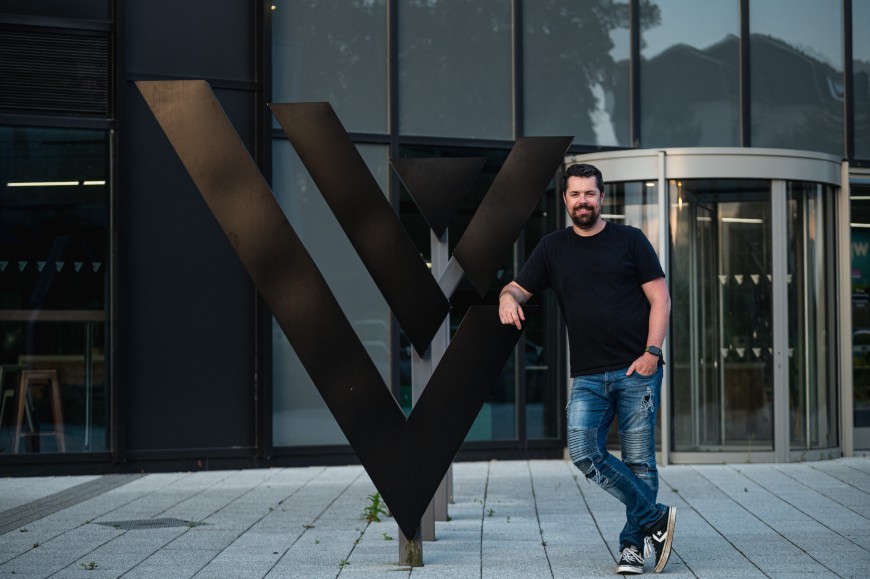 A number of world class clients agree including Sir Bryn Terfel who praised his recording experience at Yr Egin: “It was a pleasure to visit Yr Egin, and of course Steff’s studio. The facilities are fantastic, and the wonderful working conditions here upholds the quality of the finished product… and we mustn’t forget also the endless cups of tea that were offered!!”

A former Ysgol Gyfun Gymraeg Bro Myrddin pupil, 43-year-old Steffan is a graduate of media, music and theatre from the University of Wales Trinity Saint David.

Before moving into music composition and production, Steffan worked as a singer. As a performer, he toured extensively in the UK, appearing on TV and radio with stars including Joe Cocker, Michael Bolton, Blue, The Sugarbabes and Beverley Knight. He also appeared on Top of the Pops, and sang jingles for the Chris Moyles breakfast show on BBC Radio 1.

The Yr Egin centre, Steffan says, is well-placed to inspire the next generation of creative sector professionals in South West Wales.

“The speed of the internet connection at Yr Egin and the networking capabilities there are mindblowing.

“The centre can house string orchestras, with the quality of the hardware and software that’s available way beyond the budget of anyone working from home.

“Throughout the pandemic, the quality of the Zoom videos produced at Yr Egin are among the most professional you’ll see. To be hands-on with the gear at the centre is so beneficial to anyone in the creative sector.”

“With so much creative sector talent in the centre, it gives the opportunity to connect just from a conversation in the corridor, with Yr Egin also giving local people the chance to make a professional production.”

According to actor Owen Teale: "Working with Steff on a voiceover for Deliveroo was a pleasure, he was very accommodating and the studio facility rivalled that of the London studio's that I have worked at".

TV, Radio presenter and musician Caryl Parry Jones has also applauded the location: “Working with Steff in the studio is never classified as work. It’s always a happy, inspiring and a positive experience. It’s a modern, comfortable studio containing the best recording equipment in the business. Nothing proves to be too much work for Steffan, and the finishing product is always of high quality. Steff’s energy is infectious. He’s also a very talented musician and a fantastic producer, and he always secures high production values to his work. All of this is provided in Yr Egin with it’s fantastic facilities.”

Steffan said: “My 12-year-old son is very passionate about music, so Yr Egin is fantastic for him. I wish I’d have had a centre like it so close to home as a child.

S4C’s headquarters and a number of other creative sector businesses are also located at Yr Egin.

As well as high-quality office space and music recording facilities at Yr Egin, the centre has state-of-the-art green screen and vision mixing facilities, along with hot-desking spaces and extensive contacts within the creative community of the region. A second phase of Yr Egin is also being planned. It’s one of nine projects and programmes in the Swansea Bay City Region being part-funded by the Swansea Bay City Deal – an investment of up to £1.3 billion that’s worth at least £1.8 billion and over 9,000 jobs to the region in coming years,