The University of Wales Trinity Saint David has announced that the winner of the Norah Isaac Award for 2021 is Llŷr Griffiths, a BA Primary Education with QTS student from the Llandysul area. 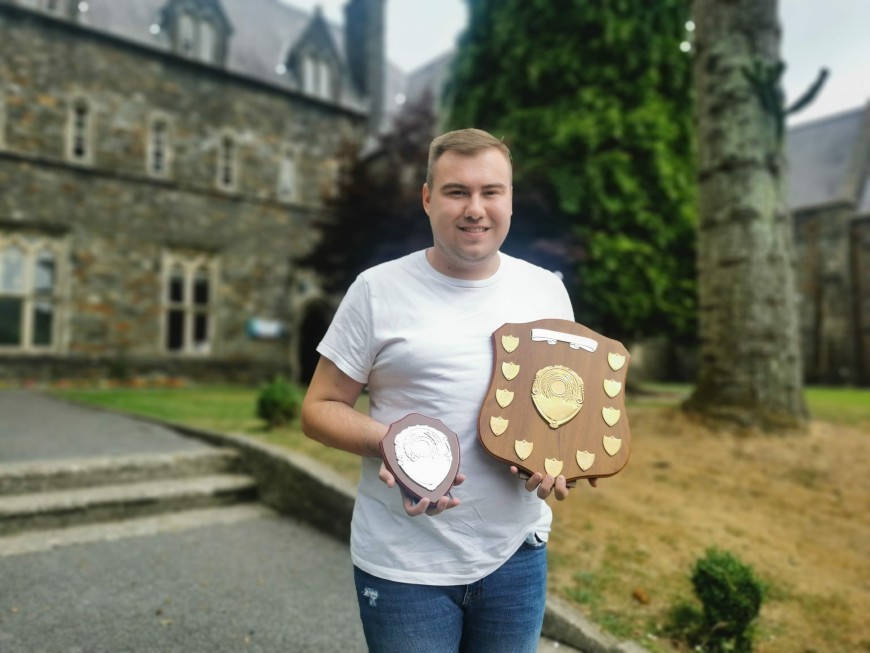 The Norah Isaac Memorial Award is awarded to the student who, in the University’s view, has contributed most to the Welsh life of the institution during the academic year.

Norah Isaac was Principal Lecturer in Drama and Welsh at Trinity College Carmarthen for many years, where she inspired generations of students. She nurtured cohort after cohort of students to become skilled teachers and they in turn thanked her for the opportunity they were given to learn at the feet of a master.

With the support and generosity of the Carmarthen Civic Society, the University announced the award for the sixth time this year at a virtual ceremony where Llŷr received his award.

Llŷr has been a great ambassador for the Welsh language and Welshness during his time at the University. Last year he was ambassador for the Coleg Cymraeg Cenedlaethol (CCC) and contributed extensively to the work of engaging with prospective students through social media.  He has been an enthusiastic member of the Welsh Society since the start of his course and was elected Chair this year.  He has been extremely active in an unusual and challenging year and organised a number of virtual events in order to ensure the society’s success from afar.  He also supported Bethan Wyn, Branch Officer for the Coleg Cymraeg Cenedlaethol, in planning the virtual ‘Freshers’ Weekend’ in September 2020. In addition, he was elected Vice-Chair of the Teachers’ Society this year, the first Welsh speaking vice-chair since the society was established. He arranged various events for prospective students and ensured that there was bilingual provision in many of the sessions. He was a supportive mentor to first year Welsh medium students. He took part in a taster day communicating in a mature and professional manner with prospective Welsh-medium students. He was also a group representative this year, voicing his views in staff-student meetings.

Llŷr said: “It really is an honour and a privilege to receive the Norah Isaac award this year. I was very shocked when I received the letter to say that I had won the award. It was a natural progression to continue to follow my course through the medium of Welsh and I am pleased that I have been able to contribute for the good of the Welsh language at the University. I have really enjoyed my time at UWTSD and it’s hard to believe it’s all over. I will look back at my time at the University with loads of good memories.”

Following successful teaching experiences, Llŷr will take up a post as a Key Stage 2 primary teacher in September and will continue to be an ambassador for the Welsh language and culture.

“Llŷr emulated the Welsh values so firmly planted in the teacher education course by the late Norah Isaac in every aspect of his academic and professional work and in the wider life of the University. We take pride in Llŷr’s success in winning this prestigious award and wish him well as a worthy ambassador for our language and culture as he starts his post as a Key Stage 2 teacher in September 2021.”

Huw Iorwerth, secretary of the Carmarthen Civic Society, added, “The Carmarthen Civic Society prides itself in being associated with the Norah Isaac Memorial Award since we established the award in 2015. It is the Civic Society’s aim to promote pride in our community and this includes matters such as history, culture and language, as well as conserving old buildings and creating quality contemporary architecture. It is therefore good to see the name of a pioneer in education and Welshness such as Norah Isaac linked to the enthusiastic future leaders of our community. Congratulations to Llŷr Griffiths and best wishes to him for the future.”