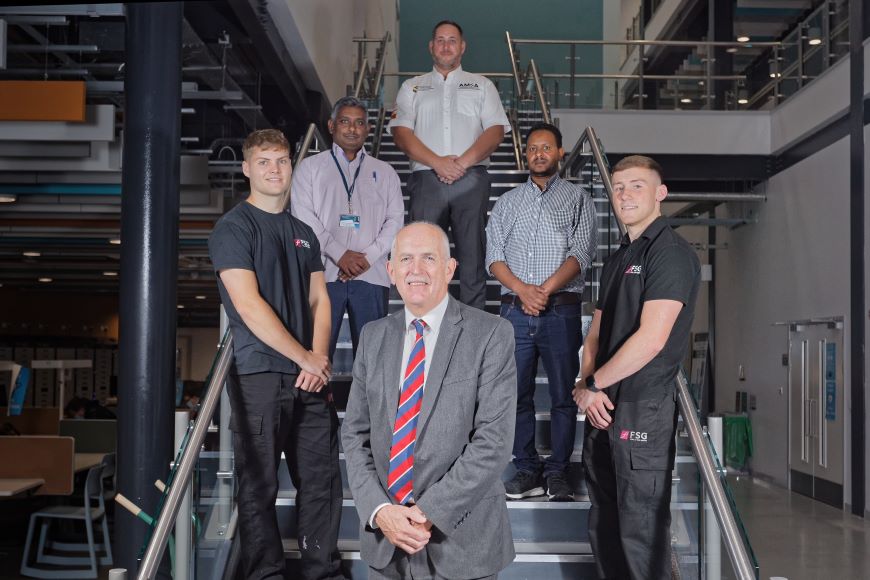 Kodie Higgins, Sion Murray and Will Holmes completed at the Skills Wales competition, earlier this year at the academy based at the University’s SA1 Waterfront campus, with Kodie and Sion being awarded gold and silver medals respectively.

The three apprentices, who are employed at FSG Tool and Die Manufacturing Ltd in Llantrisant, went on to take part in the national qualifiers of World Skills UK and are now through to the UK national finals (CNC Milling).

AMSA Academy manager Lee Pratt said: “We are immensely proud of Kodie, Sion and Will as they continue to demonstrate fantastic knowledge and skills and they are growing in confidence as a result.

“They will now undertake an intense training programme at the Academy in Swansea’s SA1 over the coming weeks in preparation for the final. I have every faith in their ability to go the full distance so watch this space!”

UWTSD Computing lecturer Nitheesh Kaliyamurthy said: "We are delighted to see Yohannes in the WorldSkills UK national finals. He never disappoints us in exhibiting his talents working with technical aspects. This is an outcome of his dedication and persistent willingness to learn. We hope this competition has boosted his confidence and look forward to seeing him achieve further. He will now work closely with our experts in the upcoming weeks. All the very best Yohannes."

TSW's Engineering Route Manager, John Moulton has coached Sion, Kodie and Will through their apprenticeships. He said: “They are natural inventors and problem-solvers. They have all the right qualities to be successful engineers and competing at a national level, comparing their skills, techniques and abilities outside of Wales, will fuel their ambitions. The finals will be a transformational moment for them."

Barry Liles OBE, Pro Vice-Chancellor (Skills & Lifelong Learning) & Head of UWTSD’s Wales Institute of Science and Art (WISA), said: "We are so pleased to learn of our students' success in being selected for the UK finals. Selection to represent Wales in the UK finals is a great achievement in itself, it also opens up the opportunity to potentially be selected to represent the UK in Worldskills Shanghai next year. I am grateful to all the staff who have supported them on their journey so far. The technical areas represented by the students are key to the economy of Wales and the University is pleased to have played a key role in the development of the students as competitors, one step away from the World stage."

The UWTSD apprentices will join more than 400 students and apprentices to take part in 64 skills competitions around the country for the WorldSkills UK national finals in November.

After a year without competitions, the finalists will be competing for gold, silver, and bronze medals between November 9 and 18.

In contrast to previous years, where the finals have been held in Birmingham, this year the finals are going on the road to 25 venues. The industrial robotics final will take place in Ballymena, Northern Ireland, while the heavy engineering competition will be held in Cardiff.

WorldSkills UK deputy chief executive Ben Blackledge said he was “really excited” that this year’s finals will be hosted by colleges, training providers and employers across the UK.

He added: “We hope seeing the finals will inspire young people at those venues to keep developing their technical and employability skills and recognise what can be achieved by developing excellence through skills.”

He congratulated all those who took part in the finals programme this year “after a year without competitions due to the pandemic”. The fact that 3,000 people applied in April and May to take part was “really encouraging”, he said.

The winners will be announced at a ceremony hosted by Steph McGovern on the set of her Channel 4 show Packed Lunch on November 26.

The competitions have been designed by industry experts. WorldSkills UK says they are intended to enhance the practical skills and knowledge taught on training courses through assessment of an individual’s employability attributes against criteria in a competitive, timed environment.

The last national finals were held at Birmingham’s NEC in November 2019. The winners got the chance to be selected for the squad that will become Team UK and compete at WorldSkills Shanghai in 2022.