A student from the University of Wales Trinity Saint David’s (UWTSD) BA Adventure Filmmaking course has recently ran a stunt team for a Vogue Photoshoot in Margate. 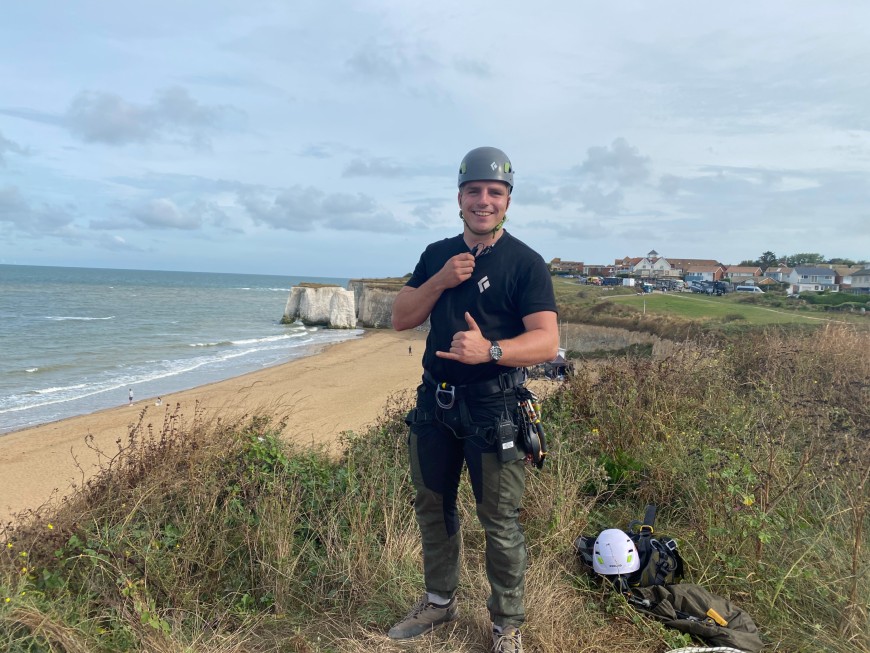 Tom Smith was in charge of rigging a production consisting of a 100 people for a photoshoot of a handbag, that will feature in Vogue. During the 13-hour photoshoot, photographer Harley Weir wanted to feature one shot on top of the cliffs, and Tom’s role was to be in charge of the ropes and to keep her and the crew safe during the production.

He said: “Through networking, I ended up meeting a contact of mine who just worked in these very big circles. I mentioned that I had a passion for the outdoors, I was hardworking, and I was willing to throw myself at the deep end essentially. After a lot of declines, I was offered this job.”

As a third-year BA Adventure Filmmaking student, Tom was attracted to the course for many reasons. Growing up in North Wales, he had a passion for the outdoors, but also his creative brain led him to think that he would like to earn money doing something which he enjoyed. He wanted to find a practical course that would suit him. After searching for an Adventure Filmmaking course, Tom came across UWTSD.

“The course is real… there’s no fluff around it. You’re given briefs on the very first day you arrive, and you know what exactly needs to be done by the deadline. In between, it’s filled with opportunities. It’s up to you what you chose to do, but the more you throw yourself at it, the more you’ll get out of it. From taking part and filming search and rescue exercises to being in the studio the next day learning about camera angles and working with actors, which is completely different!”

When Tom first joined the course, his course tutor Dr Brett Aggersberg told the class that by the end of the course the department wants to see their students leave as self-sufficient, professional adventure filmmakers.

Following the news of Tom’s work experience, Dr Brett Aggersberg said: “We are extremely pleased for Tom as his experience is an example of one of the many opportunities available in this exciting field for graduates of our BA Adventure Filmmaking degree. Tom has been able to combine his climbing expertise with the skill and knowledge of a creative filmmaker to benefit Vogue’s shoot. It’s more important than ever for students to think of themselves as professionals in training and make the most of every opportunity. To make their passion their profession.”

One thing Tom likes about the course is that it portrays the reality of working in the industry. “The course prepares you. We talk about equipment a lot, like what you need, but to use it, you need to learn the logistics. You’ve got to know it’s just not turning up to film, but it’s the 2-3 days planning beforehand to deliver and the postproduction afterwards. The realistic-ness of the course prepares you for the outside.”

He adds: “We have a whole module on critical incidents and things, and outdoor adventure leadership – that was truly in effect when I was in charge of the stunt team on the shoot. Having listened to Brett’s advice, and putting a 100% into the course means your credentials then flow straight back out directly into the media industry. It was interesting to see the provenance of the course, and how if someone is studying adventure filmmaking, and they’re doing adventurous things and working with a crew – you just fit into a niche that people actually need. I owe the course a lot for sure!”

As well as studying BA Adventure Filmmaking with the University, he’s enrolled himself on other courses such as a rope rescue course, a first aid course, and a drone pilot course.

“I fell into this idea of if I was going to be doing this course, I learn a lot better by doing practical stuff. In my head I was telling myself I’m going to do this Uni degree, but at the same time I’m going to go out and I’m going to do what these people are saying into practice.”

During his time at UWTSD, Tom has seen a development within himself and his skill set and feels that his dedication and hard work has paid off, giving him various opportunities.

“The idea that if you want to be a professional filmmaker, these are the steps that you’re going to have to take. You’ve got modules whereby you’re doing things which you don’t know or particularly like… it makes you uncomfortable, and those are the times where you learn most about yourself.”

As Tom looks forward to graduating at the end of this academic year, his aim is to develop his portfolio and to find further potential work abroad in wild, adventurous hostile environmental places such as jungles, forests and in the mountains, as well as working closer to home on exciting productions.