Second year students from The University of Wales Trinity Saint David’s (UWTSD) Swansea School of Architecture will work alongside an architectural practice to design a Welsh National Police Memorial after winning a competition. Universities from across Wales were invited to submit designs for the competition for a Welsh National Police Memorial, in Cathays Park in Cardiff.

Four designs were submitted by UWTSD for consideration to the Chief Constable of South Wales Police, Police Roll of Honour Trust, as incorporated by Royal Charter on May 11, 2021, and following shortlisting, formal presentations were made by each group to a client panel of representatives on October 20.

A winning group from UWTSD was chosen and will now be invited to work with an architectural practice appointed by the client to take the project forward. It is hoped that the memorial will be constructed in 2022.

“It was a real privilege recently to be part of a panel, reflective of elements of the police family within Wales, in choosing a design that is both reflective and symbolic of the service and sacrifice of those police officers who made the ultimate sacrifice.

"The hard work, dedication and professionalism of the students in producing four amazing designs is to be commended. They are all a credit to their university, faculty, and staff. The winning design will be a fitting, meaningful and lasting memorial to all those brave officers who gave their lives in protecting the people of Wales and who will never be forgotten.”

Ian Standen, Senior Lecturer and Programme Director of Architecture at the University’s Wales Institute of Science and Art said the students were divided into 4 groups each producing unique designs, incorporated as part of their Technology and Environment 1 module linked with design studio.

He said: “I am very proud of all the hard work and dedication the students have shown in creating unique, appropriate and thoughtful designs for such an important monument of remembrance. Their presentations showed great maturity in the quality of the designs produced and professionalism in response to questions from key client representatives.”

Chief Constable of Gwent Police Pam Kelly said: “It was a real privilege to be part of the panel choosing the design for this important project to remember those who have made the ultimate sacrifice for us all. Through their thoughtful designs, our younger generation have had the opportunity to commemorate and pay their respects to our fallen colleagues.

“This will be a fitting memorial to the brave women and men who have lost their lives in the course of their duty. They will never be forgotten.”

South Wales Police Chief Constable Jeremy Vaughan said: “It is heartening that our talented students have been provided an opportunity to take part and create their own lasting legacy in honour of our fallen colleagues. It is so vitally important that we remember all those who so selflessly sacrificed their own futures so that others might have theirs. It’s been an honour to be part of the process and I very much look forward to the day their vision for a National Policing Memorial here in Wales becomes a reality.”

Mark Jones, General Secretary of North Wales Police Federation said: “Every single day, police officers put their lives on the line to protect us all. Sadly, for some of those officers they make the ultimate sacrifice and never come home at the end of their shift. For those colleagues who laid down their lives it is only right and proper that we have a focal point to gather to reflect and pay our respects. This new memorial will be a fitting tribute to those officers and to incorporate the talent of students from UWTSD makes this even more special.”

The design brief stated that the memorial ‘was to be designed using material sourced from around Wales which will stand the test of time and require as little maintenance as possible. It should, either in full or in part, incorporate Welsh slate, as well as a plaque, allowing for an inscription to be added. The memorial should reflect the contribution, and on occasion, the tragic ultimate sacrifice made by those who choose to protect and serve the communities of Wales through policing. Key words which are close to the heart of the police, to be considered when seeking inspiration for the design, included 'fairness', 'integrity', 'diligence', 'impartiality', Justice', 'protect', 'serve' and 'duty'.

The students worked as a team via remote learning during the Covid 19 lockdown and as a result were unable to visit the proposed site of Cathays Park Cardiff.

However, they utilised all the available information to produce four different designs to create a sense of place and meaning for such an important monument. 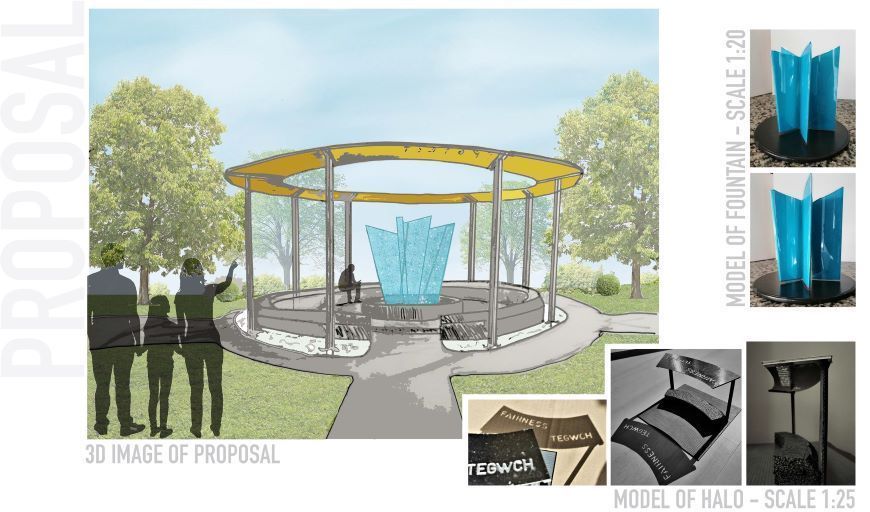 The UWTSD group members presenting were:

Jaycie Corbett said: “It was an honour and a privilege for us as a group to be part of such a sensitive project. It challenged our design ideas, aesthetically and more importantly, design a lasting monument that was dignified and respectful, commemorating the commitment of officers to society.”

Charlotte Rathbone, Landscape architect at Rathbone Partnership added: “A collection of wonderful and sensitive ideas and an appreciation that this is a “live” project with a “real” client - a rare opportunity for architectural students to create a very meaningful, powerful space and a place for the bereaved and public to visit.”

Barry Liles, OBE, Pro-Vice-Chancellor for Skills and Lifelong Learning at UWTSD said : “Providing our students with “live” projects such as the Police Memorial is of immense benefit to our students on so many levels. Beyond the actual practice related element the life skills achieved are so valuable. We are grateful for all parties concerned in giving of their valuable time in support of our learners.”