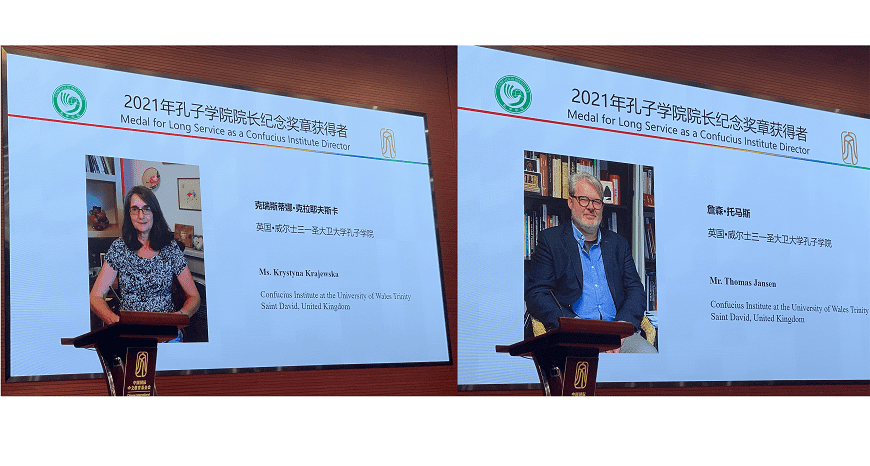 The hybrid ceremony was held from Beijing as part of the "Honouring Our Past, Building Our Future" event on World Confucius Institutes Day.  This award was established for foreign and Chinese directors of Confucius Institutes to mark many years of service and significant personal contributions to the development of these international educational institutions.

UWTSD’s Confucius Institute, based at the University’s Lampeter campus, was officially founded in 2007 by Professor Yao Xinzhong, now Dean of the School of Philosophy at the prestigious Renmin University, Beijing. During the past 14 years, the Confucius Institute’s work in schools and across the university has consistently expanded under the watch of its directors.

Dr Thomas Jansen served in the Confucius Institute between 2007 to 2019 and oversaw the growth of the Institute through the creation of five Confucius Classrooms in Welsh Secondary Schools.  His vision for intercultural communication between Wales and China enabled many UWTSD students to secure places in the Beijing Union University’s Chinese summer schools and to also gain a year abroad scholarships placements at Chinese Universities.  Following the ceremony, Dr Jansen, commented:

I am also pleased because my work with the Confucius Institute has been a deep intercultural learning experience from which I continue to benefit almost on a daily basis. Seeing again former colleagues from all continents during the award ceremony was great in its own right.”

Krystyna Krajewska joined the Confucius Institute initially as General Manager in 2010, and as Executive Director in 2013. She is also principal of the Confucius Institute Chinese School in Swansea, created in 2016 in collaboration with the Chinese in Wales Association with the aim of ensuring that youngsters from Wales’s ethnic Chinese population keep in touch with their linguistic and cultural heritage.

Krystyna has led a number of collaborative projects with a variety of departments within the University including Performing Arts, College of Art, International Hotel Management and Film and Photography. Working with colleagues she has created bespoke Chinese language and culture courses and has facilitated a number of visits by students to China.

As part of the Awards ceremony, UWTSD’s Confucius Institute submitted a video interview with teachers from Pentre’r Graig Primary School where Chinese is taught to Key Stage 2 pupils.  From hundreds of other submissions from around the whole world, UWTSD’s video was selected by CIEF as one of the top 100 videos that demonstrated best practice.  Krystyna Krajewska commented:

“I’m honoured to receive the award from CIEF.  Working in the Confucius Institute has been an enriching and varied experience and has provided numerous opportunities to showcase the richness of Chinese culture in a huge range of subject areas, not just in language learning.

The future direction of the Confucius Institute lies in creating even closer connections to the Welsh language and culture.  Over the last year blended and online learning has opened the door to many new learners, but with the provision of courses and teacher training through the medium of Welsh, we can open this door to even more people.”

Prof. Yanxia Zhao, the current Director of the Confucius Institute at UWTSD commented:

“Congratulations to both Thomas and Krystyna for their many years of distinguished service. In the face of global changes to the world of work and education, our Confucius Institute continues to play an important role as a bridge between Wales and China.”

As part of its continuing development, the Confucius Institute at UWTSD has recently appointed a new member of staff, Tang Yuqi whose Welsh name is Morwenna.  Morwenna is an experienced teacher of Chinese and an accomplished linguist.  She started to learn Welsh 18 months ago and achieved distinction in her Intermediate Welsh test this summer.  Following the appointment of Morwenna the Confucius Institute will be launching Wales’s first “Learn to Teach Mandarin” course for Welsh teachers in November.  This course will focus on triple literacy in the new curriculum.  In January 2022, the institute will also launch Wales’s first online Welsh medium course for Chinese beginners.

Click on the following link to find out more about UWTSD’s Confucius Institute: