Caryl Jones from Maesybont in the Gwendraeth Valley, is the new Manager of Yr Atom, Carmarthen’s Welsh language Centre. 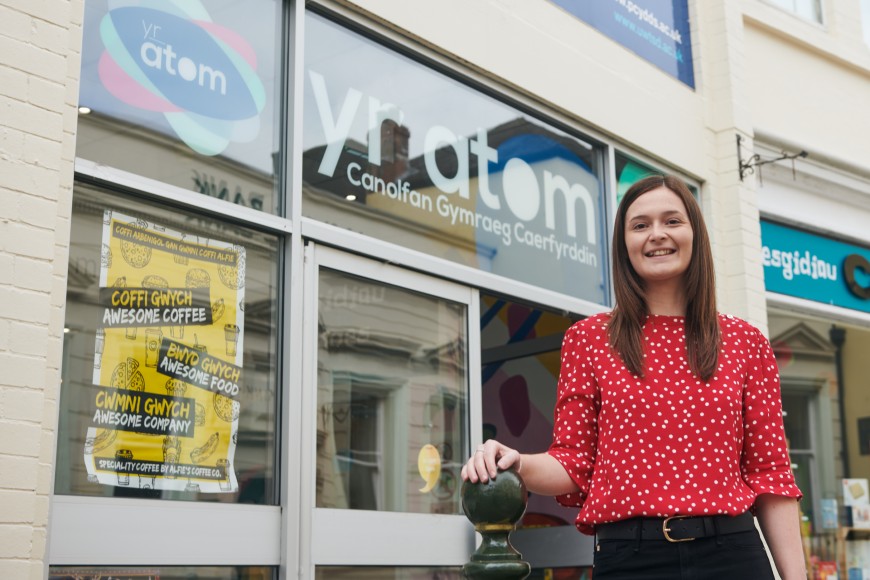 Caryl graduated from the University of Wales Trinity Saint David in 2017 with a BA Addysg Gynradd (Welsh-medium BA Primary Education) degree with QTS.  During her final year at university, Caryl was the Treasurer of the Welsh Society, and was also the winner of the Norah Isaac Memorial Award for her contribution to Welsh life at the University. Therefore, it is very appropriate that she is returning to the University as Manager of Yr Atom and is sure to lead the centre’s contribution towards the bilingualism of Carmarthen.

Since graduating, Caryl has been working as a teacher in a variety of schools in Carmarthenshire and also in Argentina, teaching Welsh to children in Ysgol y Gaiman in Patagonia. More recently on returning to Wales Caryl was Community Officer for Menter Iaith Castell Nedd - Port Talbot (Neath - Port Talbot Welsh Language Initiative).

As she starts her new role at Yr Atom, Caryl said:

"It’s a privilege to be appointed as Manager of Yr Atom. I am looking forward to building on that special foundation that has already been created here, and ensuring that Yr Atom is a hive of activity throughout the year.

“I am looking forward to collaborating with partners and making new connections in order to promote the Welsh language across Carmarthen town. I am also planning and thinking about golden opportunities for the children, young people and students of Carmarthen.”

Yr Atom is a centre where it's possible to engage with the Welsh language in numerous ways and levels and all ages. It's home to Cylch Meithrin Myrddin and Menter Gorllewin Sir Gâr, Welsh lessons for adults are held there by the Canolfan Dysgu Cymraeg Cenedlaethol and baby massage by Cymraeg i Blant. Yr Atom is also home to Menter a Busnes and companies such as Esgidiau CiC Shoes and Evans Bros Auctioneers on King Street.

“The University looks forward to welcoming Caryl to her new role as Manager of  Yr Atom.” adds Gwilym Dyfri Jones, Provost of the University of Wales Trinity Saint David’s Carmarthen Campus, and also the person who led the work to establish the centre on King Street in 2015.

“As a former student and a former winner of the University’s Norah Isaac Memorial Award, Caryl’s enthusiasm for the Welsh language is infectious. We look forward to seeing her vision for developing the centre being realised, and thereby strengthening the status of the Welsh language in Carmarthen.”

“Caryl is very well acquainted with the world of education, development of the Welsh language and with Carmarthenshire, an ideal combination for leading the development of Yr Atom through this next period. I look forward greatly to collaborating with her to ensure that the centre provides favourable conditions for the growth of the language and contributes effectively to reaching a million Welsh speakers.”