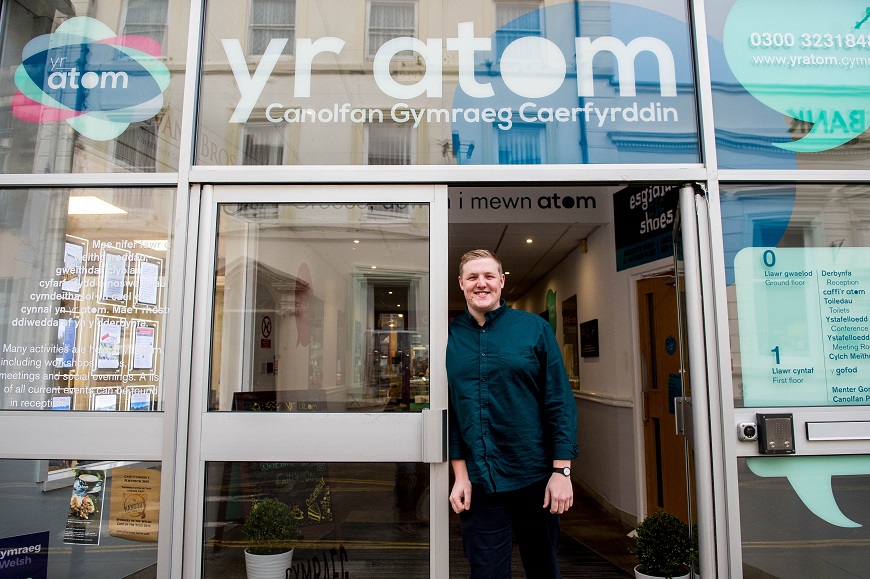 Dan, who is currently the University’s Branch Officer of the Coleg Cymraeg Cenedlaethol, admits he wasn’t thinking of attending university in the days leading up to his A Level results, but when that day arrived, something triggered his interest in higher education.

“I just thought, right that’s it, I’m going to enrol on a degree course and start the path towards a career,” he said.

Living in Llangeitho in Ceredigion, meant the University’s Carmarthen campus was the natural choice. “It wasn’t too far away, but it was also enough of a distance from home,” he added.

“I hadn’t even attended an open day, but I had been on campus through school visits, so I already had a good experience of it and the course had an excellent reputation.”

Dan said he made the call and was immediately impressed by how friendly the person on the other end of the phone was. “It wasn’t what I expected, I had thought it might be difficult, perhaps I’d be asked questions I couldn’t answer,” he said. “But the reverse was true. I was quickly put at ease and that one call secured me a place on the course and has led me to where I am now!

“The course has helped me achieve so much and not just academically. I’ve had many opportunities I wouldn’t have had without it.”

Dan, who graduated from UWTSD in 2016, was previously the Co-ordinator of Yr Atom, Carmarthen's Welsh Language Centre.

During his time at UWTSD he was elected as Students' Union Group president and during his final year, he was the National President of the Urdd and was the winner of the Coleg Cymraeg Cenedlaethol Merêd Award.

Dan also helped run the university choir; represented students on the university’s Welsh Affairs Committee; as an elected voluntary Welsh Affairs Officer in the Student’s Union and organised Welsh classes for his fellow students. He also worked closely with the then Coleg Cymraeg Cenedlaethol’s Branch Officer within UWTSD to organise Welcome events in Carmarthen and coordinate a number of social activities

In addition, Dan worked as a Social Media Ambassador for the university to promote Welsh medium courses and promote the Welsh ethos and life at UWTSD. He also volunteered with the International Department of the University.

Dan was the President of the Urdd during 2016; Chair of the Youth Board Sir IfanC; and co-led Aelwyd Myrddin – a Welsh language youth club in Carmarthen and volunteered with the organisation across South West Wales on numerous activities.

He has also supported the work of the Madog Centre for Welsh Studies at the University of Rio Grande, Ohio. During that time, he taught Welsh in schools and led on various community projects to celebrate the area's Welsh heritage. At the same time, he was also pursuing an MA degree in Education: Integrated Arts (M.Ed. Integrate Arts.)