John Morgan-Guy has been conferred a Professor of Practice of the University of Wales Trinity Saint David (UWTSD) in acknowledgement of his academic and research career. 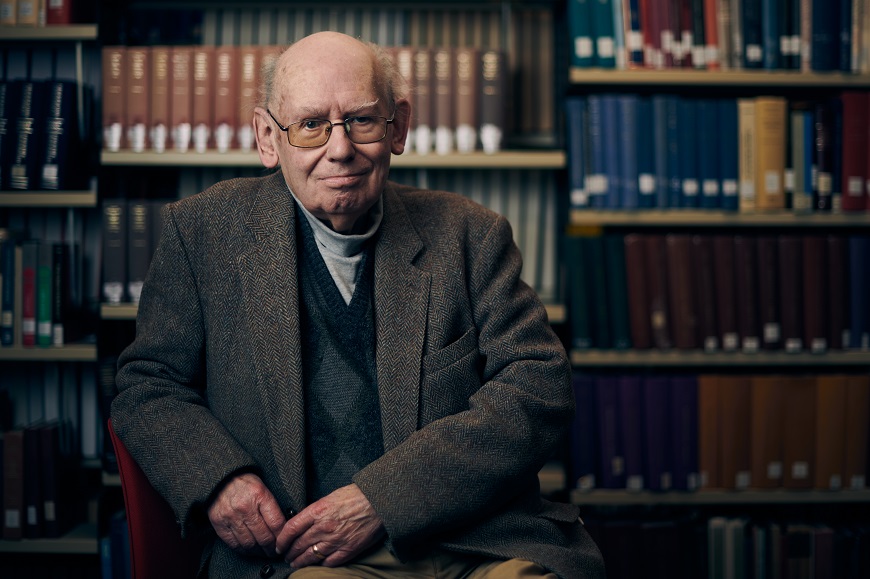 The title of Honorary Professor of Practice is bestowed upon an individual to acknowledge attained academic and/or professional distinction in those disciplines which are aligned with the strategic intentions of the University.

Born in Cardiff, Professor Morgan-Guy’s association with the University in Lampeter spans 60 years. He is a former student having commenced his undergraduate studies in History at the then St David’s College in October 1962.  From there he went to St Stephens House Oxford and was ordained in 1967.

He returned to Cardiff to begin his ministry as an assistant curate in Splott, a role he fulfilled for three years before moving to Monmouthshire as a parish priest until 1980.

He was a part-time priest and the archives adviser to Somerset Health authority for twelve years before returning to the full-time ministry, serving three county parishes around Newtown in Montgomeryshire.

In 1984, he commenced his PhD into the 18th Century Church in the Old Llandaff Diocese 1660 – 1815 as a part-time student at Lampeter and says that he believes he was the first to be allowed to do so as a non-resident student. His research was undertaken over a period of 14 years and comprised two volumes of 874 words. His thesis was completed at a time when there were no restrictions in duration or word limits set in the academic regulations. He is one of the few people to hold the award of Post-Doctoral Licence in Divinity and has also a Diploma in Ministry from the University of Oxford.

He returned to Lampeter as a part-time lecturer in Church History and as the University archivist in 1997. He also lectured at the then Trinity College Carmarthen.

He became a Research Fellow of the Centre for Advanced Welsh and Celtic Studies (CAWCS) working alongside artist and art historian, Peter Lord, on the University of Wales Visual Culture of Wales research project.

He collaborated with Professor Martin O’Kane as editor of the volume, Biblical Art from Wales, published  by Sheffield Phoenix Press which received an Arts and Humanities Research Council (AHRC) grant and was deemed of international status in the University’s submission to the Research Excellence Framework in 2014.

He has been elected a Fellow of the Royal Society of Medicine for his work into infectious diseases of Nineteenth Century. He is a Fellow of Royal Historical Society, and a Fellow of Society of Antiquities.  He was a Visiting fellow of Centre for Methodism and Church History at Oxford Brookes University in 2010 and 2020.

Professor Morgan-Guy is the co-editor, of the Journal of Religious History, Literature and Culture with fellow Lampeter alumnus, Professor William Gibson, published by the University of Wales Press.

He has published extensively - more than a hundred papers in journals, multi-author books and monographs, the first when he was still at school in 1961. These have largely centred on the disciplines of church history, the visual arts and medical history. He is a regular reviewer for several academic journals. His particular interests are in the history of the Anglican Church, especially in Wales, in the post-Reformation era, in its art and architecture; and in the medical sphere in public health and the treatment of infectious diseases in the nineteenth century.  He was a committee member of the British Society for the History of Medicine, and British National Delegate to the Council of the International Society for the History of Medicine in the 1980s, and currently serves as a trustee of the Friends of Friendless Churches.

Professor Morgan-Guy served as an interim Chaplain at the University before he retired at 71 years of age but continues his association with the University’s Roderic Bowen Library and Archives, home to the Special Collections.

Professor Morgan-Guy said: “It is a pleasure and privilege to be made a Professor of Practice at the University.  I have a lifelong association with the University’s Lampeter campus in its various guises in the history of education in Wales”.

Professor Medwin Hughes, Vice-Chancellor, said:  “The University is celebrating the bicentenary of the foundation of the St. David's College, Lampeter by Bishop Burgess this year.  This signalled the beginning of higher education in Wales.  I’m delighted to appoint Professor John Morgan-Guy as a Professor of Practice.  He is an alumnus of St. David's College and has served as interim chaplain at the Lampeter Campus from 2013 to 2016. John brings with him a wealth of experience in Biblical Art in Wales and Church History that are core to the history of the Lampeter Campus.

John will play a crucial role in providing strategic leadership in maintaining the University's rich history at its Lampeter Campus.”