The Revd Tom Evans has been conferred an Honorary Fellow of the University of Wales Trinity Saint David (UWTSD) at a Graduation Ceremony held in Carmarthen today (Monday). 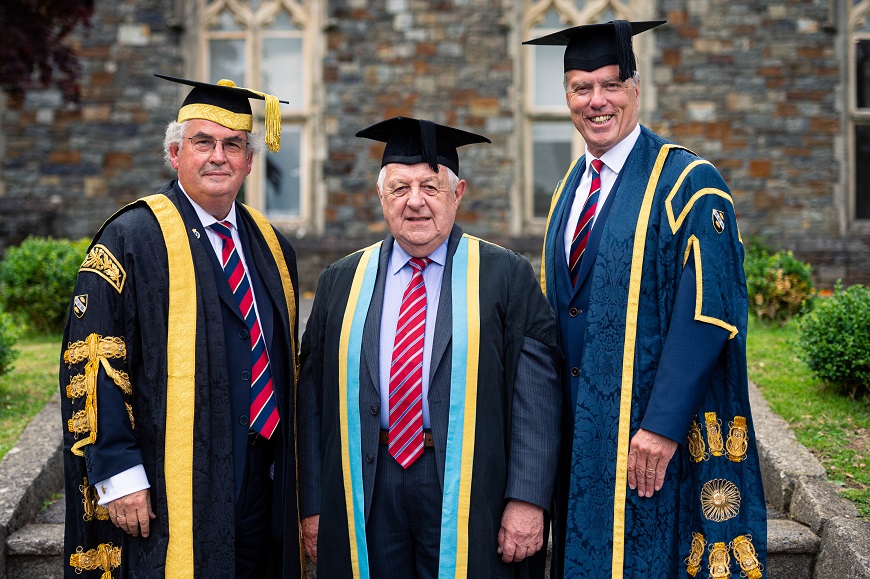 The former Dyfed Powys Police chaplain has been honoured in recognition of his voluntary work and commitment to the values of the University.

Tom Evans is a former member of staff of Trinity College Carmarthen who joined the Department of Theology & Religious Studies in 1992 before being appointed to the role of Director of the Centre for Lifelong Learning, and then Director of Student Services until his retirement in 2008.

“Tom has always been a strong and an effective communicator. This ability to communicate with others – to choose one’s words carefully, to understand one’s audience and connect with them at the right time and place, to be able to empathise with others and to share one’s views in a clear, credible and authentic way - has been at the heart of his successful career. Highly effective communicators are also very good listeners and this, I would argue, is Tom’s greatest strength. He has always provided a non-judgemental, listening ear to all, and speaks to everyone in a language they can understand."

On receiving his Fellowship, Tom said:

"The University has bestowed on me the tremendous privilege of being a fellow of this college and University.  I have a tremendous fondness of this institution, the University, staff and its Vice-chancellor.  I've had a wealth of experiences here and there’s no doubt that my life would have been poorer had I not come to Trinity."

Tom also took the opportunity to offer advice to those graduating at the ceremony.  He added:

"You've already heard that this is one step into your future, there are many more steps and learning steps to be undertaken thorough life. You'll see the words ‘Transforming Education, Transforming lives’ around the campus - today, you are the product of that very vision. But please don't see your education as being complete.  Continue to learn and continue to transform yourselves for the benefit of future societies."

Mark Collins QPM, who retired from the role of Chief Constable of Dyfed-Powys Police last year and is also a fellow at UWTSD added:

"Our officers and staff see some truly harrowing and tragic events, and when people really need somebody to listen to them at times when they are really struggling, Tom has always been there, day or night. He has become a bit of a father figure for Dyfed-Powys Police and truly enriches the wellbeing of the force."

Tom was born in London and the family returned to Cardiganshire in the early ‘50s. He was educated in Llwynygroes and Bettws Bledrws Primary Schools; Lampeter Secondary School; Memorial Theological College, Swansea; The Open University and University of Wales, Cardiff.

In 1968, during his final year at Theological College, Tom served as a Student Pastor to Tabernacle Welsh Congregational Church, Skewen, and on his Ordination in 1969 he commenced his Ministry at Bethania Welsh Congregational Church,  Upper Tumble, Llanelli. In 1975 he was appointed by Christian Aid, initially to serve as an Area Secretary for Mid Wales & Gwent and in 1987 he became the charity’s ‘National Education Secretary’ in Wales.

In 1989 Tom accepted the post of Senior Producer in the Religion Department of BBC Radio Cymru, Llandaf. During the Summer of 1992 Tom was invited to take up a post of Senior Lecturer of Theology & Religious Studies’ at Trinity College, Carmarthen and remained at the College until his retirement in 2008.

On his retirement, Tom served on the Directorate of ’Dyslecsia Cymru’ and ‘Cancer Information and Support Services’. He carried out those duties until 2012, when he become a ‘Volunteer Police Chaplain’ with the newly established Chaplaincy within Dyfed-Powys Police. In 2013, he was appointed the Force’s ‘Volunteer Force Lead Chaplain’, developing and building a strong multi-faith chaplaincy team within the Force, a role he served in until his ‘second’ retirement in 2021. In 2017, Tom’s contribution to Police Chaplaincy was recognised by the then High Sheriff of Dyfed.

Whilst serving as Volunteer Force Lead Chaplain  with Dyfed-Powys Police, Tom served on the Directorate of the then newly formed ‘Police Chaplaincy UK’; was instrumental in getting ‘Police Chaplaincy UK’ to open discussions with the University of Wales Trinity Saint David to establish a CPD programme of study that will enable Police Chaplains UK wide, as well as Chaplains in other ‘Blue Light Emergency Services’,  to gain a  Post-Graduate Certificate, Diploma and ultimately an MA in ‘Chaplaincy’.

On ‘retiring’ from Police Chaplaincy, Tom trained, and is now serving as a ‘Bereavement Volunteer’ with CRUSE. Tom is the current Chair of the West Carmarthen Association of the Union of Welsh Independent Churches.

He lives in Carmarthen and is married to Marilyn.  They have two daughters, Mererid and Angharad and grandchildren.