A 3D printing business founded by Ken Pearce; a Product Design & Technology graduate of the University of Wales Trinity Saint David (UWTSD) has been named one of the most exciting new businesses in the region after being shortlisted as part of a new awards programme. 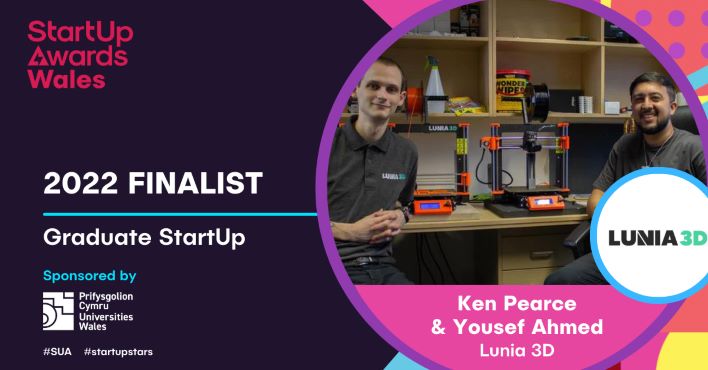 The StartUp Awards National Series has been launched to recognise the booming startup scene across the UK which has accelerated since the pandemic began. In 2020, when most of the world was shutting down, more than 400,000 startups were set up in Britain, with similar increases seen in other European countries.

There was stiff competition with over 2,500 applications received in response to the Startup Awards National Series’ first-ever call for entries.

Ken, Founder and Director of Cowbridge-based Lunia 3D said: We are thrilled to be finalists of this awards programme alongside some of the best startups in Wales. 3D printing is the future, and I’m excited to see the people of Wales beginning to recognise this amazing technology.”

Ken, who graduated from UWTSD in 2020 with a first-class degree, set up Lunia 3D after discovering the versatility of 3D printing while he was a student.

In April 2020 he and his girlfriend Georgia Hatton started 3D printing face shields to protect local care-workers from Covid-19.

“Doing this made me realise that I was passionate about 3D printing how beneficial it could be,” he says. “I decided to start my own business, Lunia 3D. Here we offer all kinds of services within the 3D printing industry including 3D modelling, product prototyping, batch production prints and much more.”

After a successful six months of trading, Ken partnered with an old school friend, Yousef Ahmed, an engineering graduate. They now run Lunia 3D together.

“The pair of us both have a great interest in 3D printing, and thought it made sense to collaborate and work together,” says Ken.

Since partnering, they have expanded the business and now have over 10 3D printers working nearly 24/7.

“We help businesses and individuals create one off bespoke or batch products that usually would have to be made overseas, therefore eliminating the incredibly expensive tooling costs and long turnaround times,” says Ken.

He and Yousef have also made it a priority to offer affordable 3D printing to students.

Supported nationally by BT, EY, Dell & Intel, the programme will celebrate the achievements of the amazing individuals across the UK who have turned an idea into an opportunity and taken the risk to launch a new product or service.

Co-founded by the team behind the Great British Entrepreneur Awards, the new series follows the success of the Wales StartUp Awards, after organisers recognised the exceptional potential in the startup scene across the other British regions.

Professor Dylan Jones-Evans OBE, the creator of the StartUp Awards National Series, said: “​​New firms are important for generating economic prosperity, employment opportunities and innovation. Since 2016, the Wales StartUp Awards have celebrated this amazing annual contribution to our economy by entrepreneurs and the impact they have on communities across the nation.

“Given the sheer volume of phenomenal startups we’ve heard from since then, as well as the huge post-pandemic shift in people’s desires to take their career in a new direction and set up a business against the odds, we felt it was the right time to take the programme nationwide. We’ve been blown away by the standard of entries in this first year and truly look forward to crowning the winners in June.”

Kathryn Penaluna, Associate Professor in Enterprise Education at UWTSD said: “Getting through to the finals of this great award is a fantastic achievement and well- deserved recognition of Lunia’s expertise.  They have been quick to respond to opportunities and made an invaluable contribution in supporting the success of other businesses too”.