The Engineering department at UWTSD celebrates with Kelvin Lake at his graduation ceremony as he receives his PhD entitled ‘A design Methodology for the Utilisation of Structural Orthotropic Composite Materials by Micro-Enterprises.’ 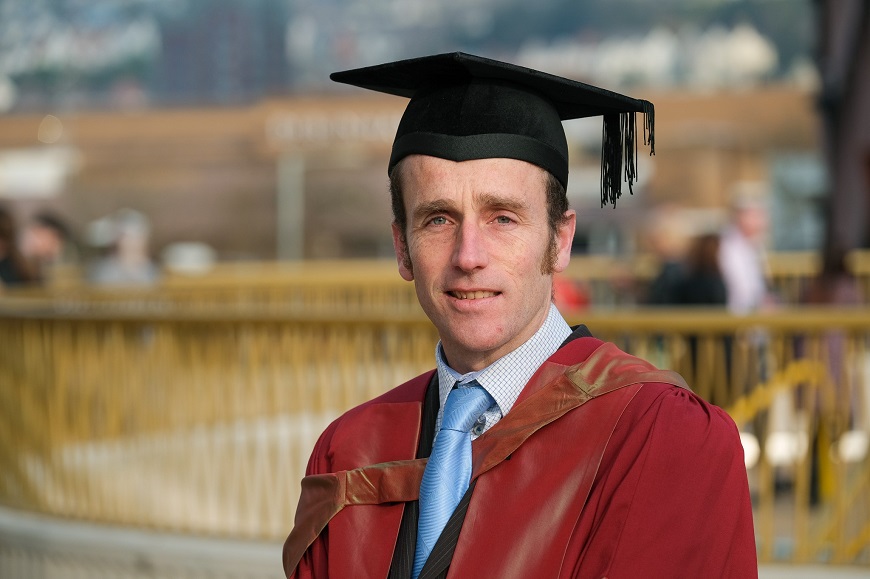 Kelvin graduated from Leeds University in 1999 with a Masters with distinction in Mechanical Engineering. Upon leaving Leeds Kelvin joined Jaguar Cars as a CAE engineer, specialising in vehicle crashworthiness and vehicle NVH. After a few years at Jaguar, Kelvin left and went travelling around Australia for a year, working for Ford Racing Australia developing the structural roll cage for their V8 Super Car whilst he was there. Once returning to the U.K. he continued to work in the Automotive industry for various suppliers, before joining Swansea Met in 2007. These suppliers/OEMs included; Meridian Technology: Where he was accountable for all linear and non-linear FEA to assist in the development of Magnesium high pressure die-cast automotive components in Europe.

“I have spent the last few years balancing family life with work with studying for my PhD, so I was thrilled when I got confirmation that it has finally been granted! It has to be said that I could not have done this on my own and have lots of help on the way.” Kelvin wanted the thank his PhD supervisors Dr Owen Williams and Professor Pete Charlton, whose inspiration and support was invaluable in reaching the end of this study journey."