Staff and students from UWTSD's Lampeter Campus began excavations this week at a site near Talsarn in the Aeron Valley. 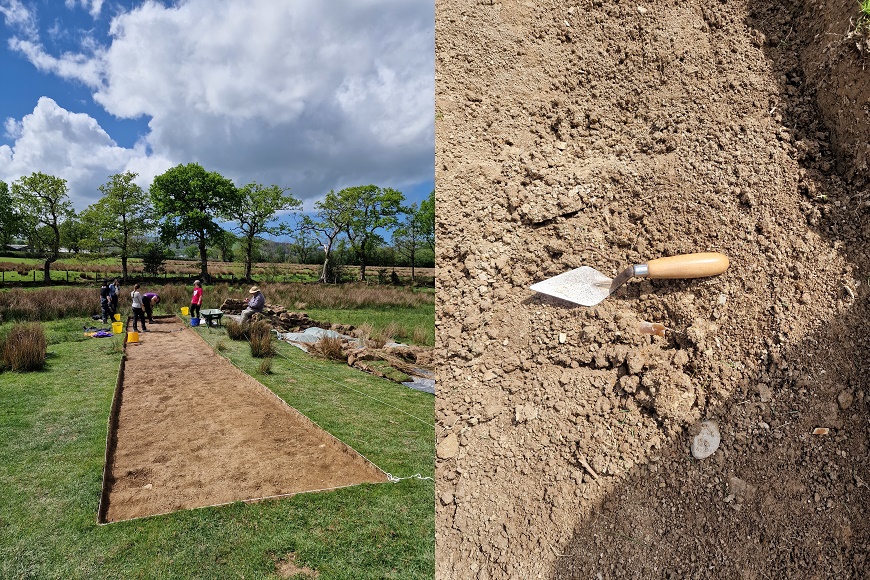 Returning to the site for the first time since 2019, the hope was that evidence for some of Ceredigion’s oldest inhabitants might be uncovered during the excavation.  Previous work had suggested that a low mound on the flat valley floor might have provided a dry refuge in an otherwise marshy landscape for people around 6000 years ago.

Within hours of returning to the site and removing the turf the first finds were made.  These finds were small, very sharp flakes of flint; the debris from making tools.  Flints are not local to this part of the UK and sources for the flint are likely to have been from southern England or possibly Northern Ireland.  These finds have so far been found on two mounds on the valley floor and while researchers are currently unsure of what exactly these people were doing; hunting, fishing or wildfowling might be amongst some of the possibilities.

“It is very exciting to be back at the site again after 3 years.  Finding our first artefacts so quickly has been great for the team and the project.”

This will be achieved by consolidating existing evidence with new data to develop a powerful new cross-border narrative, accessible within a new visitor experience at Waterford Museum of Treasures, Ireland, and Ceredigion Museum, Wales. The €1.95 million project aims to raise awareness and support community and business sustainable engagement, resulting in the establishment of two new experiential tourism and cultural networks in Ireland and Wales.

"The Portalis project is allowing us to link up new finds from the excavation with what we already know from Cardigan Bay - and to explore connections with Ireland and wider communities."

If you want to be part of this story, exploring Ceredigion’s early history, then you can join project archaeologists in the field throughout the month of May. Project staff are excavating until late May and volunteers are welcomed every Friday and then throughout the last week from Monday 23rd to Friday 27th May.  Please use the attached links to register and come and join our exciting project.

If you are a school/ college or a group you can sign up to tour the site and learn more about archaeology and the history of the Aeron Valley.