Professorial lecture explores how ancient texts from the New Testament negotiate the relationship between understanding the present and remembering the past.

Professor Catrin Williams will deliver the next professorial lecture ‘The Remembered Past and Remembering Present: The Role of Memory in Recent Approaches to the Study of the New Testament’ on Wednesday, 16 February at 4 pm. 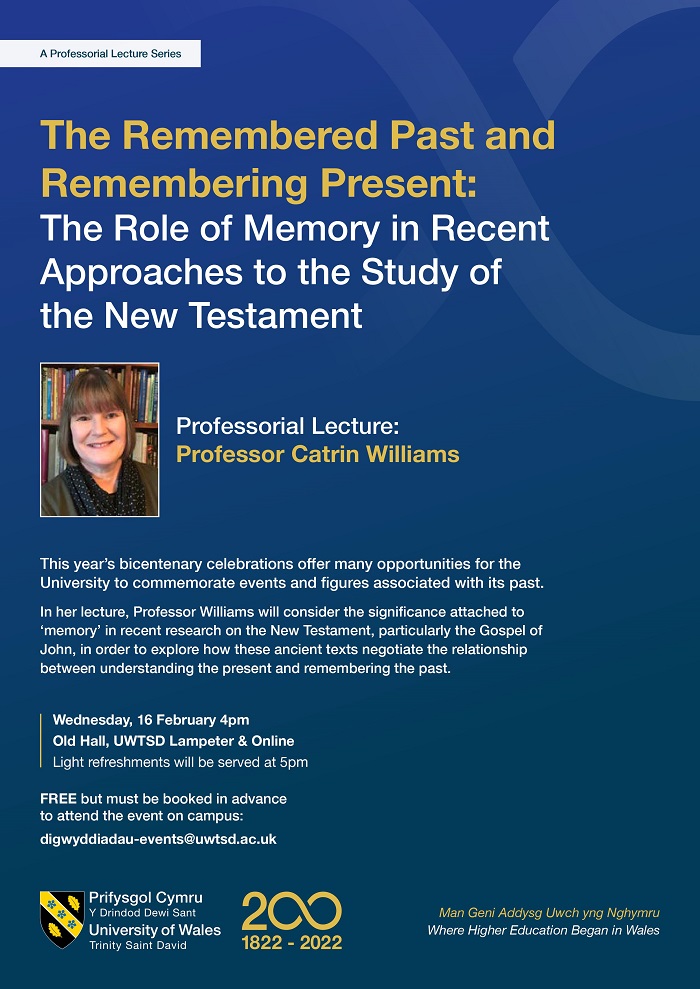 The event is part of a series of monthly lectures to be delivered by the University’s academic staff who have received professorial titles.

This year’s bicentenary celebrations offer many opportunities for the University to commemorate events and figures associated with its past. In her lecture, Professor Williams will consider the significance attached to ‘memory’ in recent research on the New Testament, particularly the Gospel of John, in order to explore how these ancient texts negotiate the relationship between understanding the present and remembering the past.

Professor Williams is looking forward to the event. She said: “I am delighted to have been invited to give a professorial lecture at the university during the year of its bicentenary celebrations and to be able to present some of my research on how memories of the past operate in certain texts of the New Testament. These writings emerged during significant moments of transition as well as upheaval in the first century CE when Christ-believers felt compelled to assert their identity against the backdrop of Roman imperial power and in relation to Judaism, the parent religion of the early Christian movement. A number of my most recent publications have therefore examined how New Testament writers, especially the author of John’s Gospel, sought to articulate their beliefs and experiences in the present by reflecting on their Jewish heritage and religious past.

“Even though my research is firmly rooted in investigating the history, culture and languages of the first century, Jewish and early Christian texts from that period have much to contribute to debates about issues in our own time. The Gospel of John, for example, may have been an influential text in the history of Christian thought and spirituality, but it's ambivalent - often negative - references to Jews within the narrative have meant that it has also played a prominent role in the development of anti-Judaism and in the rise of anti-Semitism. The difficult, often painful, legacy of such religious texts demands that interpreters should focus not only on their later reception but also on their very beginnings when religious communities sought to determine and establish their own identity in ways that often involved breaking away from others.

“I am fortunate to have opportunities to discuss such questions with colleagues in Humanities at Lampeter and also with my research students who, like me, are interested in tracing the origins of early Christian writings but also in researching the afterlives of those texts.

Catrin Williams is a Professor of New Testament Studies in the Centre for Humanities and Social Sciences (Lampeter campus). Her main research interests are the Gospel of John and other Johannine texts, including their relationship with ancient Judaism. She is involved in several collaborative research projects on the Gospel of John and also serves on the editorial boards of a number of international journals and academic monograph series. She is a member of the Colloquium Ioanneum and holds a research fellowship in New Testament at the University of the Free State in Bloemfontein, South Africa. In 2017 she was elected a Fellow of the Learned Society of Wales for which she serves as UWTSD representative.

The lecture will be held on Wednesday, 16 February, Old Hall  UWTSD Lampeter and online via Microsoft Teams.