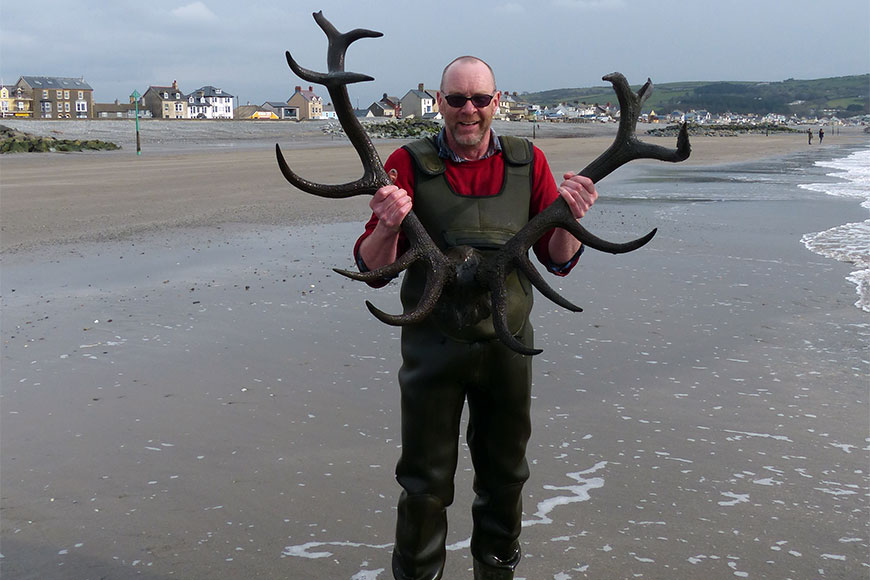 The antlers was first spotted on the beach at Borth by Julien Culham and Sharon Davies-Culham in April 2016.  The discovery was reported to the Royal Commission in Aberystwyth who in turn alerted Professor Martin Bates, an archaeologist based at UWTSD’s Lampeter campus.  Professor Bates had previously been working in Borth where he has been investigating the prehistoric forest which was buried under water and sand more than 4,500 years ago.

This latest exhibition at Borth Station Museum has been set up as part of the Portalis project which is a 20-month pilot project exploring the earliest connection between Ireland and Wales, dating back to the Early Mesolithic period.  Portlais, supported by the European Regional Development Fund through the Ireland Wales Cooperation Programme, is led by Waterford Institute of Technology and is supported by the University of Wales Trinity Saint David, Ceredigion County Council and Waterford Chamber of Commerce.

Following the opening of the exhibition, Professor Martin Bates, commented:

“The antlers were a wonderful discovery that really brought the forest and its environs to light.  When I recovered the antlers from the sea, my first thought was ‘how would we be able to use them to extend our knowledge of the ways in which the shoreline around Borth had developed?’  What I didn’t realise at the time was the extent to which they were to inspire so much more.

We’re delighted to see the antlers return to Borth Station Museum as part of this this new exhibition associated with the Portalis exhibition.  I’m also looking forward to hosting a walk through the submerged forests later in the month.”

During the month, Professor Martin Bates will also lead a walk on the foreshore at Borth to explore the submerged forest located between Borth and the village of Ynyslas.  The walk will be held on the 27th of August at 2pm.  Everybody is welcome and are invited to meet at the railway station in Borth.

The exhibition itself is open every week on Tuesday, Wednesday, Thursday and Saturday between 12.00pm to 4.00pm throughout August and ends on Saturday 3rd September.