The first tree was planted at the University of Wales Trinity Saint David (UWTSD) Lampeter as part of a project to plant 200 hundred native trees on the campus. 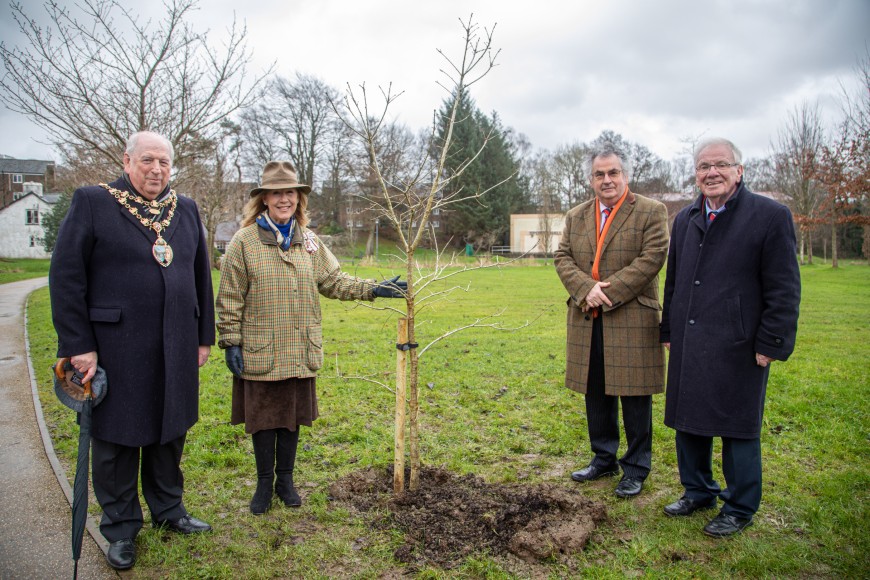 The “200 Trees for 200 years” project is part of the University’s bicentenary celebrations which links to the Queen’s Platinum Jubilee Green Canopy and which invites people to ‘plant a tree for the Jubilee’. The initiative also supports the Welsh Government’s aims of planting trees to tackle climate change.

Ms Edwards said: “I am very pleased to offer my most sincere congratulations to UWTSD on this bicentenary commemorating the establishment of St David’s College in Lampeter. On the 12th of August 1822, through the laying of a foundation stone which marked the beginning of higher education in Wales, a seed was sown which has now grown into the development of a modern, multi campus University.

“This bicentenary year also marks the seventieth year of Her Majesty’s Reign, and therefore I hope that the tree that I help plant here at Lampeter as part of Her Majesty’s Green Canopy Scheme will, like that ‘seed’ of a foundation stone, also prove to be a lasting symbol of the continuing growth of higher education for all at UWTSD for the next two hundred years and beyond.”

Lampeter’s Mayor, Selwyn Walters, Lampeter Mayor said: “It gives me great pleasure to join with the University of Wales Trinity Saint David to celebrate the Platinum Jubilee of Her Majesty the Queen by the planting of a tree on the University Campus. This is a fitting tribute to Her Majesty, and yet another example of the increasing cooperation, in recent times, between the University and the Town. A cooperation, which I am sure, will be of long-term benefit to the whole community of Lampeter.”

Professor Medwin Hughes, DL, Vice-Chancellor added: “I’m delighted to welcome the Lord Lieutenant and Mayor to the University’s Lampeter campus to launch this initiative. It is part of a range of initiatives that we have developed across our campuses to celebrate the bicentenary of higher education in Wales.  That story began here in Lampeter and two hundred years later the University continues to make a positive impact on our society.  The University is delighted to support the Queen’s Platinum Jubilee celebrations as well as the Welsh Government’s Climate Change Action Plan launched by Julie James, MS, Climate Change Minister”.

The 200 trees for 200 years initiative aims to enhance the campus environment for the University’s students, staff, and wider community to enjoy outdoor spaces and to support biodiversity on the campus.

Planting of additional trees across the campus aims to enhance biodiversity and is linked to the University’s strategic recognition that environmental enhancement is fundamental to the future health and well-being of the University, the wider community, and the planet.

The trees to be planted on the campus boundary are native orchard trees and woodland species which will benefit, for example, the pollination and habitat enhancement of a recently established bee farm. The project will also provide an opportunity to remove up to 15 non-native trees that offer minimal habitation but also damage the soil for other species to grow.