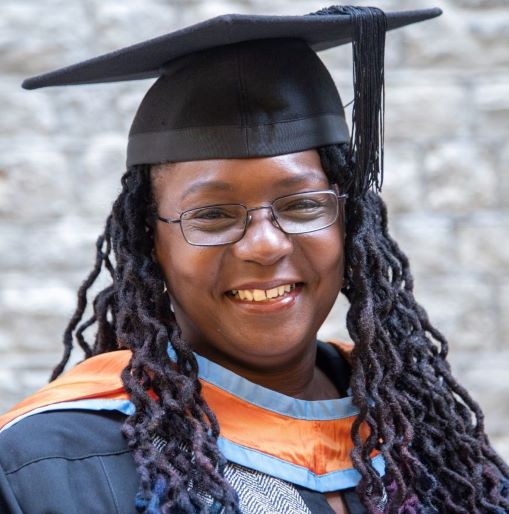 Carol was awarded her CertHE Skills in the Workplace Certificate, BA (Hons) Leadership and Management Skills for the Workplace Degree and most recently her MBA in Human Resource Management at UWTSD London. In February 2021, she decided to continue her learning and joined the Doctor of Business Administration (DBA) programme and is about to progress to Part 2 (the research journey) of her Doctoral study.

Carol, who has Dyslexia and credits the support given by UWTSD to her throughout her time at the University, has used her personal learning journey and subsequent studies as a basis for research to help others in her situation.

Carol said: “For my dissertation I chose to investigate invisible disabilities and its effects on employment, a subject that interests me so much and that has led me to enrol on the doctoral programme here. I intend to further my studies to uncover ways in which employees can support and encourage people with invisible disabilities to be included and supported with their career paths. This would place me in a good position to support both employers and employees on this topic in my future career.”

Carol said she had struggled at school as a child. “I had been labelled as stupid and destructive. However, I did manage to secure some good roles thought-out my career by working hard and working from the bottom up for each role,” she added.

“I managed to achieve an NVQ which was the qualification that led me to enrol for the CertHE skills in the workplace at UWTSD.  Unfortunately, I was then made redundant but decided to get the additional qualifications I needed to put myself on the right path – instead of working my way up from the bottom of the ladder again.”

Carol says she remembers being terrified at the thought of writing assignments but that it was quickly followed by relief when she received the news that she had passed her first modules with good grades.

“The realisation that I could do this was amazing,” she said. It was not like I had felt at school. Now I had people who believed in my academic capabilities, and I started to believe in them myself.

“It has been challenging trying to balance study with work and everyday life. However, the support given to me by the staff at UWTSD, my fellow students and my husband has been second to none.”

After completing her degree course, Carol said she was encouraged by lecturers and her husband to continue with her studies and enrol for an MBA. She is also currently working as an Operations Administrator at UWTSD’s London Campus.

“I have always had an interested in HR, so I chose to continue in this area with my studies,” she added.

Carol, who is also a course rep, said this role had helped her to support her fellow students.

“I have made some lifelong friendships at UWTSD which was an unexpected bonus. I would recommend that others take this journey as it not only opens up doors but your mind to the endless possibilities there are out there in empowering you with knowledge and opportunities for your career development.”

“Because of her personal interest, Carol plans to conduct research and explore the extent of 'invisible' disabilities” that are affecting millions of people here in the UK alone with the aim of identifying potential measures employers need to put in when there is no physical evidence of disabilities.”