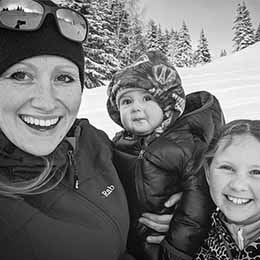 It wasn’t in my “life plan” to be returning to university at 24 years old, as a single mother to a 14 month old… then again, I’m not sure it would be for many people. But there I was, living in Carmarthenshire, Wales (having left a job in PR & marketing in Brighton) in order to be close to the essential support of my family. What was an isolating and daunting period was also an opportunity for a fresh start, a chance to write a new chapter.

Returning to my roots in the Welsh countryside that I enjoyed as a child, I began craving a new direction in life for my daughter and myself – a desire that prompted me to look at local courses and degrees that would enable me to combine a career with my ever increasing love of the outdoors, having escaped city life. Fast forward several months – I found myself timidly walking onto the UWTSD Carmarthen campus for my first day on the Outdoor Education degree (now known as BA Outdoor Adventure Education) and embarking on a 4-year journey that would be best described as … challenging!

The whole of the first year was to be an adventure. After 14 months of sleep deprivation and life revolving around breastfeeding, nappies and teething - what an escape it was to find myself bivvying on top of Cadair Idris, learning to lead climb on the cliffs of Gower, coasteering around the incredible Pembrokeshire coastline or solo camping in the Cambrian Mountains. Sitting in lectures and engaging my brain felt like sheer luxury and researching for assignments - a joy!

However, as I progressed through the 2nd and 3rd years, these feelings of elation were slowly replaced with exhaustion - weary from trying to balance parenting, studying and working. Shortly after starting the 3rd (and what should have been the final) year, I hit rock bottom and decided to quit the degree. With my daughter just starting school, I kept myself ticking over working at a local outdoor store with a manager who graciously allowed me to balance my working hours with being a Mum. Having managed to pick myself back up with the support of those around me, missing the adventures and comradery of the degree, and perhaps most importantly – feeling motivated to be a good role model for my daughter, the following year I returned to my final year of university.

Little did I know it at the time; this tumultuous journey on the degree was equipping me in a far richer way than I could have imagined – challenging my perspectives and instilling in me an appreciation of finding a balance in life (thoughts that also prompted me to write a paper and blog entitled “Mother or Mountain Guide - is having a career in the outdoors compatible with being a parent?”)

Back at university I dived head first into my studies, engaging in the lectures and saturating myself in the literature – rediscovering that joy and motivation I had felt when I first started my studies. The following summer, the hard work paid off and, as I stood in front of my family and daughter, I was awarded a 1st class honours degree – one of the proudest days of my life.

Motivated by what I had achieved, and excited at the prospect of being able to research my ideas and thoughts further, I decided to continue with postgraduate studies at UWTSD. During this time I also briefly worked as an assistant lecturer with the first year students on the Outdoor Education programme – something I adored… even the marking!

But again, a year later, my “life plan” changed and brought the opportunity of starting a new chapter. This new chapter not only involved a new job and a new relationship, but a new country as well.

I’m now based in beautiful Chamonix, nestled at the foot of Mont Blanc in the French Alps – the “extreme sports capital of the world”, or perhaps more poignantly known as the “death sports capital of the world” – something I was reminded of while recently filming in the local cemetery surrounded by the graves and memorial stones of men and women in their 20’s and 30’s, climbers, mountaineers, aspirant guides.

I work here as an independent adventure film producer enjoying a rich variety of work, that has enabled me to travel all over the UK and Europe and as far afield as Tasmania. One day will see me sat behind a computer working on post-production or writing an article, another day I will be behind the camera capturing an interview with a philosopher on the ethics behind ‘adventure sports’ – but it has to be said, the best work days involve a 10km ski up a glacier to set up our film crews base camp at the foot of an Alpine north face.

This current work will materialize itself in a documentary called Magnetic Mountains – which explores why we are drawn to the mountains, despite the risk and sometimes devastating consequences – asking, is it worth it? (Reminding me of one of the degree modules I studied “Adventure: a risk worth taking”).

My daughter (now 7!) is also settled into a local Montessori school (a decision also influenced by my time on the degree) and we have a baby on the way, due in July… perhaps life’s greatest adventure!

“And the trouble is, if you don't risk anything, you risk even more” (Jong, 1973). While venturing back into studies was a risk, it was ultimately one worth taking. I look back on my time at UWTSD with fondness: for the way it challenged and pushed me to my limits, for the kindness and acceptance of my fellow students and tutors - a close community whose gentle encouragement spurred me on at some of my lowest points, and for the way it opened my eyes. There is no doubt that my work is continually influenced by my time on the degree – instilling in me a desire to always delve a little deeper, to be both critically aware and reflective in my thinking and approach, and to act with prudence  - in both my professional and personal life.