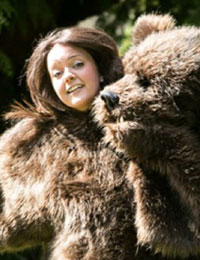 She started her career in Edinburgh as a freelance designer and maker of bespoke animal props, animal suits and body paddings. Alice's previous employment includes well-known companies and shows:

During recent years she has enjoyed working along-side World Stages London with Battersea Arts Centre, Lyric Hammersmith, Sadler's Wells, Stratford East, Young Vic and Wildworks Productions Ltd; supervising a team of makers to costume a unique site-specific production, with a cast of 500 for "...the first ever collaboration between eight London producing venues and 12 UK and international co-producers."- 'BABEL London'.

Alice was an integral part of the costume and design team with Wildworks Productions Ltd and National Theatre Wales on 'The Passion', an internationally televised live theatre event (re-mastered for the film 'The Gospel of us', starring Michael Sheen).

Alice's primary interests lie in the Medieval era, Victorian clothing and structural costume design and construction. Her background in Fine Art has assisted her in the production of scenic artistry and inspired an interest for both historical and contemporary design within the arts.