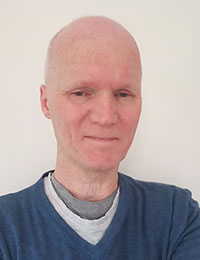 Andrew graduated with a BA in Welsh from the University of Wales, Aberystwyth in 1995. Apart from Welsh itself, this also involved studying several other Celtic languages, including Breton, Cornish and Irish. His first full-time job in education was at a Further Education College in Cardiff where he worked as a Welsh language lecturer for ten years.

In 2002, he undertook an MA in Early Celtic Studies at the University of Wales, Cardiff, with a focus on historical and archaeological aspects of that field.

More recently, in 2020, Andrew completed an MRes in Bilingualism and Multilingualism at the University of Wales Trinity Saint David, where he also manages the institutional translation service, and has previously worked as a translator, language officer and Welsh language tutor.

He has worked for the university since 2005.

The Association of Welsh Translators and Interpreters

He also supervises dissertations in Part 2 of the above programme.

His MRes dissertation looked at biocultural diversity, and the similar processes of evolution, ecology and extinction encountered by languages and biological species alike.

During his years in Further Education, Andrew worked on secondment for Sgiliaith, promoting Welsh-medium courses in that sector across the whole of Wales.

In the same period, he qualified as an external verifier for NVQ language units and as a bilingual moderator for Key and Essential Skills.

Before moving into education, Andrew worked as a planner in the electronics industry for twelve years.