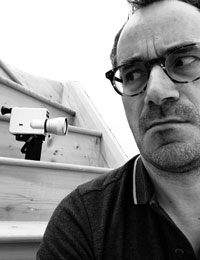 As a lecturer, I design modules, write and deliver lectures, seminars and workshops, deliver tutorials on BA Film & TV and BA Set Design. My main specialism are in scriptwriting, directing and producing, taking students from first principles in these areas through to their final major projects. I have been involved in the Copper Coast International Film Festival since its inception, taking a lead role in organisation of the awards ceremony. I also undertake relevant course administration, attend relevant course, Faculty and University committees and meetings.

I am a writer, director and producer, and have worked for BBC1, ITV, BBC Wales and various independent film & television companies. My work in short film as a writer/director has won the Welsh BAFTA for Best Short Film, and I have been nominated for two other Welsh BAFTAs. I have also worked as both a producer and a lighting cameraman on award-winning short films.

As a writer/director, my primary interest is in the teaching of storytelling on screen, from initial ideas process and development, through script writing and rewriting, to direction, editing and post-production. In addition, I am interested in how students can best learn the organisational and technical skills to support and enhance their creative ambitions.

I am interested in the potential for using motion graphics techniques with digital backlot production to create a new hybrid approach to narrative storytelling on screen. This was the subject of my Masters and I have several works in development exploring these potential techniques.

Also, I am interested in web series as low-budget entry points to video distribution and exhibition, and the storytelling potential offered by this approach.