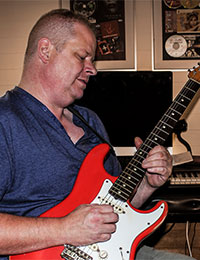 I am a Lecturer across all three year groups on the BA(Hons) Creative Advertising Programme. His teaching responsibilities cover several advertising, graphic and marketing modules on the course, the content of which is taught via lectures, workshops and group work.

I have the role of Year 2 tutor which involves providing pastoral care and advice to help students achieve their full academic potential. Wider University duties involve admissions, marketing, recruitment and retention for the BA(Hons) Advertising and Brand Design Programme and the School of Graphic and Digital Arts.

I also teach Entrepreneurship and Marketing and Self Promotion modules to Year 2 and 3 BA(Hons) Illustration and Year 2 BA(Hons) Graphic Design students.

I have over 30 years experience in the creative industries. A freelance designer /illustrator  working in all areas of the industry for companies such as BBC, NHS (Wales), Ministry of Defence, National Coal Board (Wales), Warner Music Group and agencies/publishers worldwide illustrating books, magazines and graphic novels.

I am a musician/songwriter and have toured extensively in the UK and Europe and been an active session musician; studio, live and broadcast, and am an active member of the Musician’s Union.  Written songs in many different styles and published to companies such as Warner/Chappell Music and EMI.

Currently writing, producing and recording an album of progressive/ambient music with two other industry songwriters (several of the tracks already included on compilation albums with international release). For further information go to www.chasingthemonsoon.com

Member of Musicians Union and on the committee of the Swansea International Jazz Festival.

I presently teach all three year groups the wide range of disciplines that are essential for a career in the advertising and brand design industries with specific focus on idea generation, craft and professional development.

Modules I teach are:

I Have worked as a Dynamo Role Model employed on a sub-contract basis for Big Ideas Walesto visit schools, colleges and universities andgive talks on business start-up and entrepreneurship.

I Have also co-produced and published a Swansea City Football Club fanzine; proceeds from which go to various local charities and children’s sport teams – we also have an event promotion side to the enterprise that raises money through live concert and theme nights.  Myself and my partners have been doing this for 10+ years and have raised many thousands of pounds for the causes we support.

Have been an Academic Champion of Entrepreneurship for the university and, whilst this role no longer exists, I still mentor graduates and organise/take part in entrepreneurial activities.

I also work closely with the university’s commercial services department; organising industry visits and writing reports on the entrepreneurship education within UWTSD.

I have been a freelance illustrator/designer for 25 years and also edit/publish a successful Swansea City fanzine, combined with an associated entertainment agency, which raises money for local and national charities.

I also freelance for the Welsh Assembly Government as a Dynamo Role Model, giving talks and facilitating business start ups in secondary and higher education. I have also had a role within UWTSD as an Academic Champion of Entrepreneurship, helping and advising students on business start ups; this is a role that I continue with, although it is no longer a formal position, to this day; through my personal networks I bring in many industry professionals to present to my students.