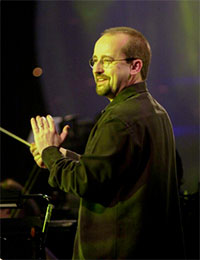 Welsh Musician John Quirk has a wealth of talent and professional experience as Musical Director, Arranger, Composer and Conductor.

In the theatre, he has worked as Musical Director for the musicals Annie, Gypsy, The Canterbury Tales and Grease (national tour) and also for numerous pantomime productions working with a host of well-known celebrities such as Joe Pasquale, Neil Morrissey, Ruth Madoc and Melinda Messenger. He regularly works as Musical Director for music series on S4C featuring international guests such as Bryn Terfel, Rebecca Evans and Vanessa Mae. For the BBC, he worked on the Money in the Bank series, where guests included Status Quo, David Essex, Dave Edmunds, Toyah Willcox and Leo Sayer. John was also the inaugural Musical Director of the National Youth Jazz Orchestra of Wales.

John is especially renowned for his work as a Music Arranger. For Television, he has created arrangements for names such as Peter Karrie, Harry Secombe and Larry Adler, and has been commissioned to write several hundred transcriptions and arrangements ranging from small vocal ensembles to works for symphony orchestra. His concert arrangements include music for the ‘Dragon's Fire’ concert at the inaugural Faenol Festival in 2000, and many others in this series, all of which have been broadcast on S4C. He also arranged a duet for Larry Adler and Cerys Matthews which was performed at the Duke of Edinburgh’s birthday celebrations at the Royal Albert Hall, London and was both the conductor and arranger for the television film “Ryan and Ronnie.”

John’s work as a composer includes writing numerous signature tunes for television, such as Môr O Gan, Datganiad, and Noson Chis a Meinir for S4C. For the theatre, he has written music for productions of The Railway Children, The Canterbury Tales, The Tempest, Romeo and Juliet and On the Tongue of a Bird .Other compositions include a fifty minute dance suite, Kubla Khan, based on the Coleridge poem which the West Glamorgan Youth Dance Company performed on a tour of Denmark. His subsequent arrangement of the work for orchestra, entitled Prelude Fugue and Chorale was also toured nationally by the Welsh Philharmonic Orchestra.

As a conductor, John has worked with the BBC National Orchestra of Wales many times, including concerts of Welsh Popular Music (subsequently released on eight CDs). Other conducting highlights include the Bafta Cymru Awards and many concerts at the National Eisteddfod, featuring Wynnne Evans, Cerys Matthews, Catrin Finch, John Owen-Jones, Rhydian Roberts, Shan Cothi, and many more. He is also a world record holder – for the world’s longest distance duet, featyring Shan Cothi and the BBC NOW.

John is also a performer in his own right, having played across the UK as a soloist with many groups ranging from Jazz through to Rock and Classical, as keyboard player, bass guitarist and vocalist. He is currently working on projects with John Owen Jones, Shan Cothi, Wynne Evans, and the National Eisteddfod, and recently conducted Les Miserables at the WMC.