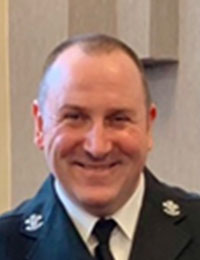 Jon served as a police officer for over 25 years serving in both South Wales and then Gwent, rising through the ranks to Temporary Deputy Chief Constable.

During the extensive 25 years policing career Jon has worked in a number of roles and had the opportunity to work outside the service with a secondment to the Home Office in 2002 (Policing Bureaucracy Taskforce) and in 2008 (Single Non-Emergency Number Programme). Throughout his 23 years in South Wales Police Jon performed various roles up to the rank of Temporary Assistant Chief Constable, including many significant operational roles.

In February 2017, Jon was appointed a Gold commander for the largest sporting event in the world, the 2017 UEFA Champions League final. He is an accredited and experienced Gold and Silver Public Order Commander and Strategic Firearms Commander. In December 2017, Jon was temporarily promoted to Assistant Police Constable in South Wales Police for Operational Support Services, which includes responsibility for Specialist Operations, including the Public Service Centre, Criminal Justice, Information Management and Information & Communication Technology.

In November 2018, Jon was successful in gaining a place on the College of Policing Strategic Command Course 2019 and graduated in March 2019.

Jon joined Gwent Police in the role of Assistant Chief Constable in April 2019 and was temporarily promoted to the rank of Deputy Chief Constable between July 2019 and December 2019. During this period Jon led the Force change Board and instigated a number of programmes of change including a new approach to performance management and victim satisfaction.