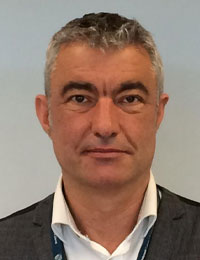 Research areas of specialism include family and community engagement.

Prior to joining the school improvement service Ken worked in further education, youth work and for Careers Wales. As a teacher in further education he was involved in the delivery of the Key Skills of Communication, Working with Others, Problem Solving and Improving Own Learning and Performance among other areas of responsibility. In his time with the youth service, Ken gained a good working knowledge of informal education whilst working as Youth Club leader and an outreach youth worker.

Whilst with Careers Wales Ken worked as a Youth Gateway team leader, supporting a team of Advisers working with young people who were at risk of disengaging with education or employed. As 14-19 Development Officer, he was involved with many of the developments of the Learning Pathways agenda in Wales including the development of the Learning Core and the creation of the Learning Coach qualification. Ken moved on to the role of Training and Development Manager, responsible for the CPD of over 130 staff and Quality Improvement Adviser, in which role he contributed to the quality assurance programme of the company.

Ken joined the Education and School Improvement Service (ESIS) as 14-19 Associate Adviser and supported the 14-19 Networks of Bridgend, Caerphilly, Merthyr Tydfil and Rhondda Cynon Taf with their work. This involved developing and delivering CPD for Learning Coaches and other support staff, workshops for schools adopting the WBQ qualification and assisting schools and Networks in ensuring that they met the Learning and Skills Measure. Ken also supported two Networks as Quality Champion and in this role, he helped to develop a Network Quality Assurance Framework and he has also supported Networks and other local authority agencies in preparing their Self-Assessment Reports. During this time Ken also began his work for Investors in Families as an assessor and has now assessed over 100 schools for the award.

Ken then joined the newly formed Central South Consortium forming part of the LiNKS team and supporting schools in addressing the Minister’s third national priority of reducing the impact of poverty on educational attainment as well as supporting schools in the learning core and learning support aspects of Learning Pathways 14-19. During this time Ken helped to develop an audit tool to assist schools in evaluating their use of the Pupil Deprivation Grant and was seconded to Welsh Government as part of a team writing family and community engagement guidance for schools.

As Senior Associate for family and community engagement at the WCEE Ken was responsible for coordinating the Investors in Families award in Wales and working with schools and local authorities to create and identify models of effective practice.

FaCE the challenge together: Family and community engagement toolkit for schools in Wales  Department for Education and Skills June 2015.