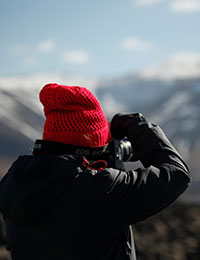 Kylie works as a technical demonstrator on the Film & TV course providing workshops on the art of film. Based on the philosophy that students should explore, experiment and interpret. These workshops provide a starting point for further personal development.

Students are encouraged to engage with a variety of visual prompts in workshops, as well as implementing a professional attitude as they take on specific job roles such as a DOP or 1AC. For example, whilst students perform the duties expected of them as a particular member of a film crew, the session creative focus may entail the reimagining of a particular scene. Such as a scene from Westworld by applying the compositional language found in Mr Robot, and the language of light found in Caravaggio's masterpieces to re-visualise the scene. These 'mashup' sessions develop a range of technical and professional skills, but also allow students the opportunity to experiment with a variety of aesthetics.

From an art and design background, Kylie work in the medium of film, which includes experimental video sculpture, corporate videos and stop-motion animation.  As well as writing on the subject of philosophy and film/TV.

Research interests specifically focus on philosophical investigations into a variety of film and TV series.  Examining a range of narratives and characters to animate philosophical discussions.