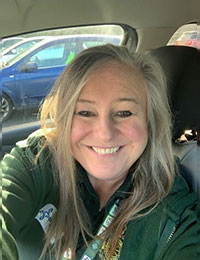 Part of the Development for MA Modern Slavery

Nici qualified as a Registered General Nurse at the University Hospital of Wales in Cardiff in 1986. From a very early stage, she identified a passion for Cancer Nursing and Palliative Care and became a Ward Sister at the local Cancer Centre in 1988.

She later moved into hospice care and became a Specialist Palliative Care Nurse at St David’s Foundation in Gwent. In 1995 Nici combined her love for nursing, palliative care and teaching and commenced a career in education and training and worked with Macmillan Cancer Support as a national Lecturer until 2007. Nici’s professional areas of special interest include communication and interpersonal skills training, mentorship/supervision/coaching & leadership.

In 2007, Nici became immersed in the complexities involved in the delivery of public services and up until August 2019 was the lead officer for addressing human exploitation for the Cardiff Public Service Board. In this role, she continued to have strong links with nursing, health & social care and police professionals and led the strategic and operational multi-agency response for sex work and modern slavery in Cardiff, supporting women working in the sex industry and victims of human trafficking and slavery.

Now retired from the NHS, she continues to drive forward this agenda on both a strategic and operational level and joined the Centre of Expertise for Child Sexual Abuse as a Practice Improvement Advisor in November 2019. She is committed to finding better ways of working together to improve the health and well-being of vulnerable people and families and developing a high-quality multi-agency response for those most in need.