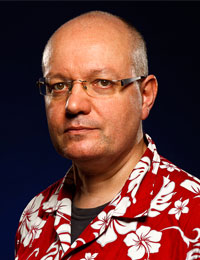 Paul Duerinckx is a senior lecturer for the BA (Hons) Photojournalism degree. His practice is based primarily on social documentary photography. He has worked for various editorial clients including The Daily Telegraph, Express Saturday and Nursing Times, for corporate clients and as a stills and portrait photographer for television companies.

From 2004-5 he was the project manager and a photographer for The Final Season, a documentation of Swansea City AFC’s final season at their long-established home ground, The Vetch Field. This resulted in the book, The Final Season and an exhibition at Swansea’s Glynn Vivian Gallery in 2005. His work also featured in the group publication and exhibition Unreliable Truths (Glynn Vivian, 2008). More recently, his portraits and studio images of illustrators were published in the book, Making Great Illustration (A&C Black 2011). Portraits from this series were exhibited at the Peninsular Gallery in Plymouth (2012).

A current commission, the Book project, a response to the Glynn Vivian gallery during its current closure and refurbishment, is due for publication in 2014 and his work was recently exhibited as part of Diffusion, Cardiff’s international photography festival.

Association of Photography in Higher Education