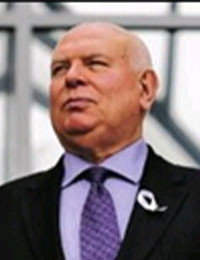 Stephen’s previous career roles include being the Welsh Government’s Anti-Slavery Co-ordinator. Prior to this appointment, Stephen worked for the London Organising Committee for the Olympic and Paralympic Games 2012, in the Security and Resilience Directorate where his roles included the Manager for Games Security Co-ordination Centre, Lead Venue Security Planner and Project Manager.

In his previous career, he has worked across the UK and overseas in roles which include Deputy Director for the Central Operations and Performance Directorate for the UK Border Agency, Assistant Director with the Police Standards Unit and Violent Crime Unit at the Home Office, Head of Equalities & Community Safety with Cardiff Council and an Area Commander in the British Police Service. Stephen is an experienced consultant with the UK and overseas experience in Organisational Development and Engagement, Emergency Preparedness and Civil Protection, Leadership and Management.

In the role of the Anti-Slavery Co-ordinator, Stephen led and coordinated the multi-agency response to tackle slavery which aimed to make Wales hostile to slavery and to provide the best possible support for survivors. He established and was a member of the Wales Anti-Slavery Leadership Group. He was a member of the Home Office Modern Slavery Strategic Implementation Group, All Wales Portal Group, Modern Slavery Helpline Advisory Board, Board Member of Crimestoppers Cymru and a member of a number of other key UK and National Groups.

Responsibilities included leading on other Serious Organised Crime issues and being part of the cadre to work within the Emergency Co-ordination Centre for Wales (ECCW). For the Wales NATO Summit 2014 and UEFA Champions League Cup Final Cardiff 2017, Stephen was the Government Silver Command Liaison Officer. For the 2020/21 Welsh Government response to COVID-19, D20 (EU Transition) and other concurrent events he was the ECCW Operations Director and Welsh Government Liaison Officer for the Strategic Co-ordination and Recovery Groups.

In 2016, Stephen received the Welsh Government Award for Leadership. Whilst serving in the Police Service, he received a number of commendations for leadership and bravery. Stephen is proud to be an Ambassador for the White Ribbon Campaign, which promotes men taking a stand to end violence against women and girls.

He is also an ambassador for the UK Modern Slavery Helpline.